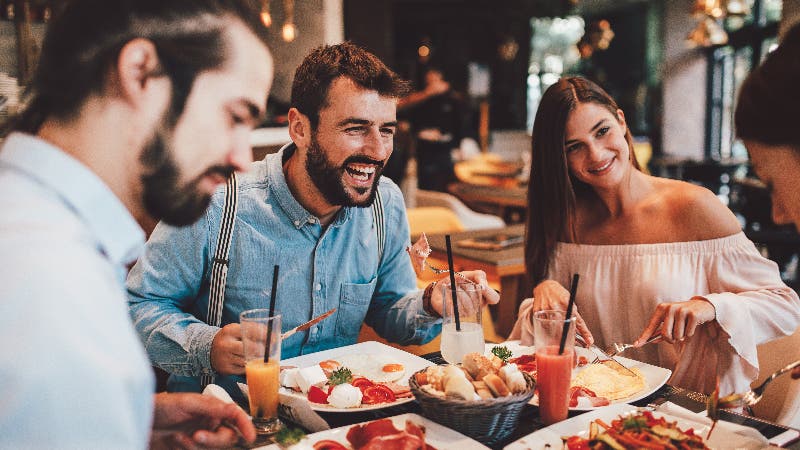 A great dining rewards card can be a boon for anyone looking to rack up points at their favorite restaurants.

For those who are really savvy, picking up the tab for a dinner out with friends then having them repay you is a great way to boost rewards without any extra spending. In fact, it’s a trick that 18 percent of rewards credit cardholders have used, according to a recent survey from Bankrate.

But for many, the cost ultimately outweighs any rewards earned. According to the survey, of those who have picked up a group bill with the expectation of being repaid, 70 percent were not paid back at least once. Twenty-three percent even admit it happens frequently.

Here are a few things to consider before committing to paying for your next group outing, and some tips to help you collect the payments afterward if you do decide to risk it.

In general, picking up the bill is likely not a good idea, says Ted Rossman, industry analyst at Bankrate. “Often, people who try this strategy don’t get paid back,” he says. “That can cost real money well beyond the value of the rewards you were hoping to earn. If you want to do it anyway, don’t spend more than you can afford to lose.”

Using the Savor card as an example, you could easily earn $8 in cash back on a single group dinner totaling $200 by footing the bill. But when you also stand a fair chance of not being paid back by other members of the group, $200 is a lot to risk for those few dollars in rewards.

Beyond the issue of repayment, you may want to consider the less tangible effects of always attempting to pick up the bill for your own gain.

“If you are the one charging on your card because you want the reward points, it’s a risk you take when you are attempting to gain something to your benefit,” says Diane Gottsman, national etiquette expert, author of Modern Etiquette for a Better Life and founder of The Protocol School of Texas. “Your friends should not feel like it is a business transaction or a means to gain something to your advantage at the end of the night. There are probably several people who get points on their credit card who would like to do the same thing.”

Putting the bill on a single card can make things easier for your server, but if it inconveniences your friends and family, it may be best to split checks rather than build resentment in your relationships.

Gottsman also says it’s important to know your audience. You may have one group of friends wherein no one bats an eye at one person picking up the bill for rewards and everyone pays their share in a timely manner. But another group may frown upon doing so.

Communication is key. Broach the topic before ordering respect the group’s decision. A few extra credit card points are not worth risking your friendships.

It’s okay to say no

And if you’re a part of the group, but you’d rather pay on your own instead of pooling together on someone else’s card, it’s perfectly fine to refuse.

“It’s up to you if you want to join the group that is paying the friend separately, or you would rather pay your own bill,” Gottsman says.

If you do want to refuse, you should try to keep payments simple for your server, though, so things don’t get complicated when the bill comes. Again, it’s important to communicate beforehand.

“Ask for a separate check before you order so the server doesn’t have to separate it at the end,” Gottsman says.

Despite the possible repercussions, any opportunity to earn some extra points toward your next vacation or credit card statement is still tempting for many rewards cardholders.

You can’t always guarantee you’ll see repayment, but there are a few things you can do to improve your chances of earning your points without taking on extra costs.

Make sure you clearly communicate the specifics of what each person owes you.

Snap a picture of the receipt and send it to everyone. Take a few minutes to calculate each total yourself and let group members know individually. You’re the one benefiting from footing the bill and the one with money to lose if not everyone pays their share, so it pays to make things as simple as possible.

“If you’re sitting at a restaurant table, for example, collect cash before everyone leaves,” Rossman says. “Or send a request via a peer-to-peer payments service such as Venmo. Once everyone moves on, it’s going to be much harder to get your money back, which can lead to lost funds and hurt feelings.”

If you haven’t received your repayment in a timely manner, it’s okay to follow up (and follow up again).

“You can follow up as many times as necessary, but before you do it again with this person, think about the effort it took to get paid back,” Gottsman says.

If you don’t get your payment back in full, reconsider next time whether footing the bill is a good idea—some groups may be able to pull off the act more successfully than others. Earning extra points is always a plus, but it shouldn’t come at the cost of your overall financial health or your relationships.