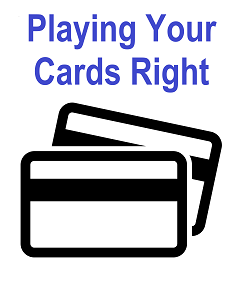 I’m a big fan of signing up for a new credit card in advance of a spending spike. The best sign-up bonuses require a substantial amount of spending in the first few months, so take advantage of spending spikes such as vacations, home renovations and holiday shopping to hit the threshold with money you would have spent anyway.

Ideally, your new card will offer ongoing perks in addition to the welcome bonus. Those could include cash back, travel rewards, airport lounge access, extended warranties, cell phone insurance and more. Figure out how you spend your money and what you value most. It’s an individual decision.

I recently employed this strategy for the third year in a row. I’m planning some home renovations, so it’s a good time to add the Capital One Venture Rewards Credit Card to my wallet. You’ll get 60,000 bonus miles when you spend $3,000 on purchases in the first 3 months from account opening. That’s a solid initial haul, especially considering annual fee is only $95. Plus, I’ll get 2 miles on every dollar I spend.

That will be valuable over the longer term because the best flat-rate card I currently have is the Capital One Quicksilver Cash Rewards Credit Card (1.5 percent cash back on all purchases). I’ll also have the option of transferring miles to Capital One travel partners, but their Purchase Eraser feature appeals to me the most. Every mile is worth 1 cent when you redeem with the Purchase Eraser, as opposed to 0.5 cents per mile if you redeem for a statement credit. The statement credit option would cut the value of my miles in half, so I won’t redeem that way.

In 2018 and 2019, I added travel cards to defray the costs of family trips to Disney World. I earned sizable introductory bonuses and 3 points per dollar on my travel spending through the Wells Fargo Propel American Express® card and the Citi Premier® Card (earns 3 points at gas stations, air travel and hotels). Those saved me a total of about $1,500, between the initial bonuses and the rewards I earned on the two trips.

I especially like getting a new card before an expensive period because that’s a really efficient way to hit the bonus spending threshold. For example, I easily spend $3,000 in any three-month span, but much of that spending is better suited for my other cards. The best way to get the Venture bonus is through spending other than groceries, gas, travel and dining, because I already get more than 2 percent cash back in those categories. The Venture card will optimize my home renovation spending more than the cards I already have, with the added sweetener of the 60,000 mile bonus worth $600 toward travel (when you spend $3,000 on purchases in the first 3 months from account opening).

How to avoid common mistakes

I love this strategy, but it’s not for everyone. Here are some of the biggest mistakes I see and how to avoid them:

Chasing rewards while in debt

Last year, we found 68 percent of credit card debtors were making an effort to maximize credit card rewards. That’s a big mistake because credit card rates are really high. It doesn’t make sense to pay something like 17, 20 or 25 percent just to earn 1, 2 or 3 percent in cash back or travel points/miles. If you’re in credit card debt, forget about rewards for now. Concentrate on paying off your debt with a 0% balance transfer card, taking on a side hustle, cutting expenses and/or selling unneeded possessions. Then go for rewards.

Some 30 percent of credit cardholders have never switched the credit card they use most often, according to a 2019 survey commissioned by our sister site CreditCards.com. Another 9 percent last switched more than a decade ago. Tastes and lifestyles change. Maybe you used to travel a lot but now you don’t. Or you used to have debt but now you don’t. Or you’ve traded your dining out habit for nights in with your growing family. Whatever it is, if you’ve been using the same card year after year, it’s probably no longer the right one for you.

A good fix is to leave old accounts open with a zero balance. If you’re concerned about the card being closed for inactivity, make an occasional small purchase and pay it off right away. If the card charges an annual fee and you’re not getting much value from it, ask the issuer for a product change (switching to a different card from the same issuer). That will allow you to ditch the annual fee, preserve your credit line and avoid a credit score hit.

Adding (and removing) credit cards smartly will maximize your rewards, minimize your debt and protect your credit score. Check out our CardMatch feature to get matched with a card that best fits your needs.