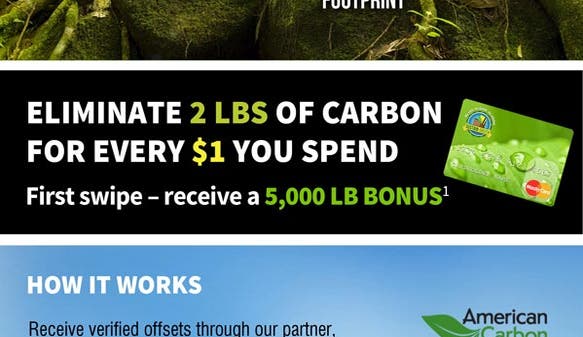 Trying to go green? There’s now a credit card that can help with that.

Eco-conscious company Sustain:Green has launched a new credit card that lets cardholders earn two pounds of carbon offsets for every dollar they spend.

For the eco-friendly, but not necessarily eco-versed, carbon offsets essentially allow individuals and businesses to compensate for carbon emissions by financing environmental projects such as rainforest preservation, reforestation, renewable energy efforts and water stewardship.

In launching the card, Sustain:Green is aiming to make it easier and more cost-effective for consumers to reduce their carbon footprint.

“Our goal was to give people a sense of empowerment so they could do something about climate change,” says Arthur Newman, co-founder and CEO of Sustain:Green.

Sustain:Green is working with the non-profit American Carbon Registry for transparent rewards tracking. Funding generated by the cards will be used to support the Mata no Peito rainforest preservation projects in Brazil.

The MasterCard, issued by Commerce Bank, is also biodegradable — it’s made of special PVC plastic designed to break down once exposed to soil bacteria.

“The best way to destroy these cards is to cut them (up) and stick them in your backyard,” Newman says.

The company is also working on a prepaid card, set to debut this summer, made of the same materials. The card will also carry a rewards program “fairly comparable to the credit card,” Newman says.

In terms of costs, the new credit card carries no annual fee. Sustain:Green is offering an introductory annual percentage rate of 1.99 percent on purchases and balances for the first six months. After that, the APR jumps to anywhere from 12.24 percent to 18.24 percent, depending on a consumer’s credit worthiness.

Prospective cardholders can apply for the card online. Of course, when applying for any credit card, you want to be sure your credit score can handle a new line of credit. Those maxing out their current cards are best served paying down existing debts before adding another payment method to their arsenal.

Also, each credit card application generates a hard inquiry, which could ding your score a few points, especially for those with marginal credit.

What types of rewards would entice you to open up a new credit card? Let us know in the comments below.