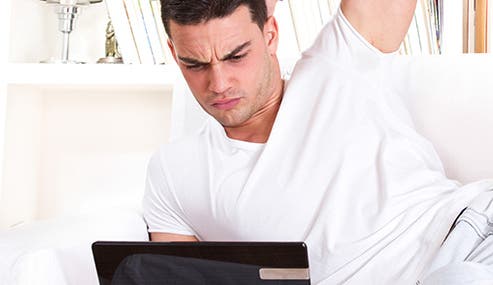 No gain, no pain.

That seems to be the general investment strategy for many Americans, according to Bankrate’s monthly Financial Security Index. A majority appear to be gun-shy about the stock market, preferring predictable, yet dismal interest rate yields from CDs and savings accounts to rolling the dice on Wall Street.

The index, based on telephone interviews with more than 1,000 people in the U.S., found that nearly three-quarters of consumers would rather settle for low yields in liquid accounts than venture into the stock market. That’s despite a post-recession surge in stocks, with 2013 returns hitting around 30 percent.

“People would rather have pathetically low interest rates in something safe rather than (what they see as) the roller-coaster returns on the stock market,” says Rick Larrick, a professor of management at Duke University.

The reason investors have grown conservative has more to do with their reluctance to get into the stock market than the low interest rate environment, says Ed Yardeni, president and chief investment strategist of Yardeni Research Inc.

And this reluctance is all about human psychology.

Studies have shown that losses loom larger than gains in consumers’ minds. That means that a loss of, say, $500 is felt more strongly by a consumer than a gain of $500. As a result, average individual investors are taking the safer path. They’d rather book smaller returns than risk losing money.

Interest rates have plunged recently. Since October 2011, the yield on a one-year CD has declined 36 percent and the rate on a money market account dropped 27 percent, according to Bankrate.

Time for a correction?

Yardeni says some of that conservative stance on the stock market may be somewhat justified, as the market is due for a correction.

“People are concerned that they’re getting in late,” Yardeni says. In hindsight, he says, investors are realizing they should have invested in the stock market back in 2009. “This has been a five-year bull market. Things don’t last forever. The greater things last, the greater the risk.”

In an April 2 note to clients, Jim Paulsen of Wells Capital Management compares the current bull market with a five-year bull market that began in 1982. That market surge collapsed in 1987 with the Standard & Poor’s 500 index suffering its biggest single-day percentage loss ever.

Paulsen says the current market surge, which he tracks back to March 2009, has followed a similar path and duration as the 1980s bull market. Will this one collapse in the same spectacular fashion?

“History doesn’t usually fully repeat,” Paulsen says in his note. Still, he suggests investors should wonder whether there may soon be “perhaps a 10 percent correction” in the market.

Other analysts are less concerned.

Brian Rehling, chief fixed-income strategist with Wells Fargo Advisors, says he advises clients that the market has not yet reached a peak. “There’s still a lot of nervousness,” he says, “and a lot of people willing to hold on to cash and not make anything.”

Some more inclined to invest

Not everyone is staying away from equities, of course.

Jamie Patrick Hopkins, 28, of Bryn Mawr, Penn., says the stock market is his go-to investment option now that rates on CDs, bonds and other secure savings accounts are so low.

“I think it is a big financial mistake for young people to not be heavily invested in equities with current interest rates at historically low levels,” he says.

Indeed, younger investors, who have more years to invest, will likely benefit most from investing in the stock market.

Yet Bankrate’s survey doesn’t show much of a difference among younger respondents and those who are older. Those 65 and older were slightly more likely to say they were not inclined to invest in the stock market.

The survey also found that people who were employed full time were more likely to invest in the stock market than those who were unemployed or retired.

That is expected, as those with limited income might not have the funds or tolerance for losing, Geller says.

Leslie Corcoran, CFP, president and owner of Family First Financial Planning in Stuart, Fla., says one of her clients recently completely liquidated all of her stock market investments. That client, afraid of a tumble in the stock market, put her money instead into a money market account.

While Corcoran says she does expect the market to go down a bit soon, she’s not as pessimistic as some of her clients. She still tries to get many of them to invest at least some of their money in the stock market.

The bottom line, say Rehling and Corcoran, is to make rational decisions based on how you use your money, rather than making an emotional decision that could cost you money.

“We’ve been encouraging them to move cash off the sidelines and invest in the market,” Rehling says.

Rehling says it may take a new generation — one that hasn’t seen some of the past decade’s turmoil in the markets — before the U.S. sees more confidence in investing in equities among individual investors.

“It may take a very long time to see people’s psyches recover,” he says.