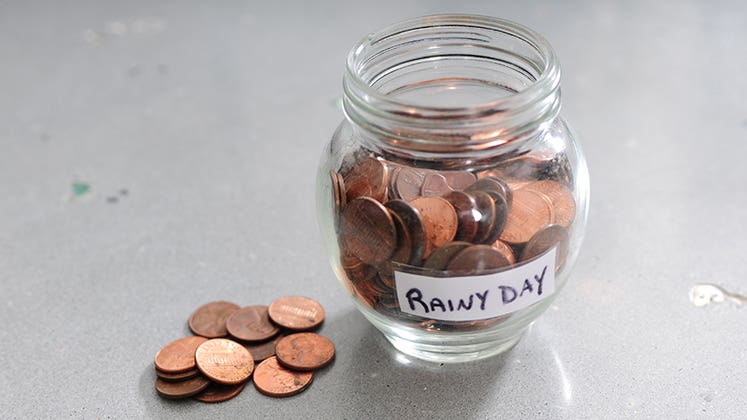 The Great Recession should have been a case study in the value of saving. But a new survey from Bankrate shows that many Americans aren’t preparing for the next downturn with a rainy-day fund.

Bankrate’s Financial Security Index for June found that about a quarter of consumers don’t have an emergency cash reserve. Nearly a quarter don’t have enough savings to cover three months’ of expenses. These percentages have not budged much since 2011 when Bankrate began asking consumers about their emergency savings.

How much do you have in emergency savings (i.e., money that is readily available in either a checking account, savings account or money market)?

For some, an emergency savings simply doesn’t pencil out — after they’ve paid monthly utilities, rent and other expenses, there’s no money left, says Rebecca Kennedy, founder of Kennedy Financial Planning in Denver.

Unemployment in May was 6.3 percent, a decided improvement from recent years, but still indicative that many Americans are struggling. There are still 3.4 million people who have been unemployed 27 weeks or more.

Bankrate’s survey found that the likelihood of having enough money to cover six months’ worth of expenses — the general rule of thumb for emergency savings — goes up with consumers’ income. Still, even among consumers who make $75,000 a year or more, fewer than half (46 percent) have enough to cover six months’ expenses or more.

“There are a lot of folks, surprisingly even in the higher income brackets, who don’t have much to spare after the mortgage is paid, the car payments are made and the ancillary expenses are accounted for,” Kennedy says.

Many consumers have a propensity to put off saving for a hypothetical financial emergency in favor of dealing with more near-term or tangible financial priorities, says Saundra Davis, financial coach and founder of Sage Financial Solutions in San Francisco.

That’s the case for Mary Horowitz, 33, an attorney in Raleigh, North Carolina, who says she and her husband have enough set aside to make three months’ of mortgage payments.

It’s not as much of an emergency cushion as she’d like, she says, but right now, the couple is trying to pay down “massive grad school debts” and also juggle expenses associated with having a young son.

“The other financial obligations weigh more heavily on us — so if I were to stay up worrying, it would definitely be about the other things,” Horowitz says.

Ken Hevert, vice president of retirement products for Fidelity Investments, says this is a common scenario. “It’s difficult for people to make progress against multiple goals: saving for college, a house, retirement, paying off debt,” he says. “It’s a balance.”

Tom McGuigan, a financial adviser with Exencial Wealth Advisors in Old Lyme, Connecticut, says he isn’t sure why the economic situation of the past few years didn’t provide more of an imperative to consumers to squirrel away money for emergencies.

“The recession should have been a learning experience for having some reserves,” he says.

Kennedy says she thinks many people view the recession “as a wake-up call mostly in terms of their debt levels,” rather than a lesson in saving.

Indeed, Americans actively paid down their debt and reduced new borrowing following the financial crisis. A November 2013 report by the Federal Reserve Bank of New York said that “holding aside defaults, from 2007 through 2011, consumers reduced their debt at a pace not seen over the last 10 years.”

Consumers didn’t make a parallel shift toward embracing rainy-day funds, Hevert says, though the recession did at least create recognition that they’re needed.

“The financial crisis that we all went through, it woke people up,” Hevert says. “They realized: ‘There is stuff not in my control that I need to gain more control over again.’ The recognition and intent to have an emergency fund has grown over the years.”

Certainly, Americans aren’t poo-pooing the idea of emergency savings. Bankrate’s survey shows that many wish they could boost their savings levels, with those who report feeling less comfortable about their savings today outnumbering those who are more comfortable by nearly 2-to-1.

Davis says everyone knows they need an emergency fund, but getting people to prioritize it can be difficult.

People “are often looking more at how they manage their day-to-day cash flow and how to live within limited means than preparing for some future events,” Davis says. “The question is, how do we get them to look at both?”

Hevert says saving three to six months’ worth of expenses is “a lot of money.” He says it’s often good to start with a smaller goal and work up because if the goal out of the starting gate feels unattainable, people won’t go after it.

McGuigan suggests getting people to think about how much cash they’d need to put aside to feel secure. He also suggests setting up an automatic deduction that goes straight into emergency savings, so consumers don’t even see the money in their checking accounts.

Davis says another way to start saving is setting small goals. She says some people use the 52-week savings plan, where a consumer starts by saving $1 on the first week, $2 the second week, $3 the third week and so on.

She says she has another group who doesn’t spend $5 bills, instead taking all those bills and putting them into emergency savings.

The main point, she says, is to feel good about your financial security. She says she asks new clients what their biggest concerns and goals are. Almost invariably, one of the top worries is what to do if something unexpected happens.

“When we prepare for emergencies, what does that do? It makes us feel secure, responsible,” Davis says. “That’s the point.”