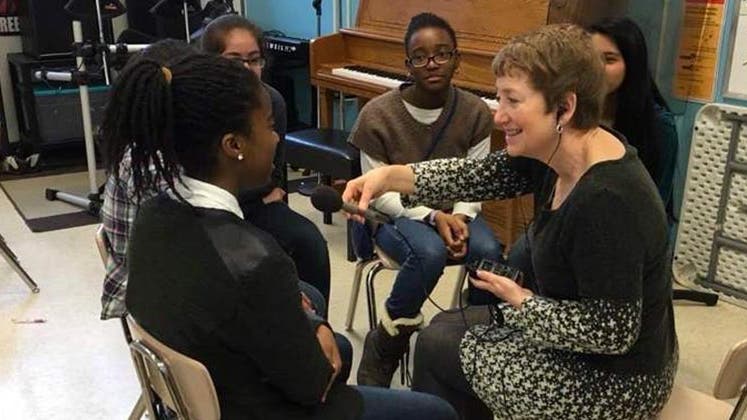 Kitty Felde, 62, loves talking about books with young people. After she retired from radio journalism, she started a Book Club for Kids podcast.

Being retired in her early 60s was never part of Kitty Felde’s plans.

But when a buyout was on the table 2 years ago, Felde accepted and retired from her job as a public radio journalist in Washington, D.C.

She worked on craft projects and sold some on Etsy, the e-commerce website focused on homemade items. But that didn’t fill up a day or offer her the fulfillment she sought.

“As much as I love to sew,” she says, “I am not a customer service person, and I don’t like to sew for other people.”

RATE SEARCH: Need an IRA to stash retirement cash? Get started by looking for a high-rate IRA money market account.

Casting back to the parts of her job she had most enjoyed, she realized talking about books to and with kids was a passion. She started the Book Club for Kids podcast and is beginning to monetize the venture with underwriting from National Geographic.

‘We want to make a difference’

Felde, 62, is not alone in extending her working career, as our society’s definition of retirement continues to change.

70% of people say they want to work as long as possible, a new Bankrate Money Pulse survey finds. Also, early retirement is no longer the goal it once was. Just 13% of non-retired respondents said they hope to retire in their 50s, down from 27% when the question was asked in 2007.

“We can’t imagine sitting around knitting for 30 years,” Felde said.

Bankrate’s Money Pulse survey was conducted Aug. 18-21, 2016, by Princeton Survey Research Associates International with a nationally representative sample of 1,000 adults living in the continental U.S. Telephone interviews were conducted in English and Spanish by landline (500) and cellphone (500, including 305 without a landline phone). Statistical results are weighted to correct known demographic discrepancies. The margin of sampling error is plus or minus 3.8 percentage points for the complete set of data.

Ken Dychtwald, a gerontologist in California’s Bay Area and an expert on aging-related issues, agreed with Felde.

“We’re seeing a new model of aging,” he says.

Since Social Security was established to answer the dismaying poverty rate among the elderly, retirement has evolved. In the 1970s, Dychtwald notes, cruise lines and retirement communities sprang up, and people saw themselves stepping out of the workforce into a splendid leisurely existence.

Now, many people, like Felde, are working because they enjoy it. Aurelien Windenberger, 32, co-owner of a consulting business in Fairfield, Iowa, wants to be in that category as well.

“My hope is that I still enjoy working enough that I continue wanting to work,” he says.

“Working a few extra years is a great way to shore up a nest egg,” Dychtwald says.

Post-retirement work can be different

But post-retirement-age work could look a little different. People may want to keep working, but not to the same extent they did when they were mid-career. They may cycle back and forth, work part time or find a way to work 8 months a year.

After 30 years in mainframe software, Dick Kuiper, 70, thought it would be nice to just take it easy and play golf.

“I was a little burnt out,” he says. “Although the work wasn’t grueling, I wasn’t learning anything (new).”

It was time to retire. But Kuiper wasn’t done working. He is now a freelance business writer in Portland, Oregon — for both the satisfaction and the money.

“It’s always nice to have a little supplemental income,” he says.

If he has a home improvement project he doesn’t need to turn to his retirement fund or savings accounts. He’s free to turn down projects that don’t interest him.

“I can take the ones that look like they’ll be fun,” he says.

While still a researcher and senior executive at the National Institutes of Health in Washington, D.C., he began putting together his next phase as a professional speaker on emerging technologies.

“A friend told me, you want to retire to something, not from something,” he says.