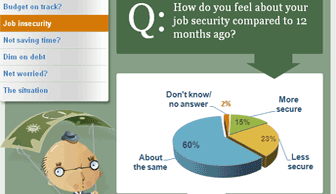 The economic recovery is stalled on the tracks, unemployment is turning up and a measly handful of jobs were created last month.

The result: Workers are worried. The number of Americans feeling confident in their job security is the lowest to date in the latest Financial Security Index poll from Bankrate.com.

Only 15 percent of workers polled for the survey said they feel more secure about their job today than they did a year ago. Nearly one in four says he or she is less secure.

“Lackluster job growth has Americans’ feelings of job security at the low point of the year,” says Greg McBride, CFA, Bankrate’s senior financial analyst. “And no wonder. There are 6.3 million people out of work at least six months, and the needle isn’t moving.”

He adds: “The timing of the poll is worth noting. The release of the dismal June jobs report on July 8 was in conjunction with the poll being conducted July 7-10.”

Only 18,000 new jobs were created in June. With such a paltry number of positions available, the competition can be fierce. For job hunters, experts advise heeding the adage, “It’s not what you know, it’s who you know.”

Translation: Get networking — now. Luckily, the Internet makes networking quick and painless, even if you are woefully introverted or terrible at small talk. Social media such as Facebook and LinkedIn allow you to connect with vast swaths of professional contacts.

Meanwhile, recruiters are perusing these sites looking for candidates. A recent survey by Jobvite.com, a recruiting technologies specialist, found 87 percent of companies use LinkedIn when recruiting while 55 percent scan Facebook and 47 percent turn to Twitter.

Addressing Congress earlier this month, Federal Reserve Chairman Ben Bernanke pointed to temporary economic shocks that stifled job creation. These included a spike in energy prices and the calamitous tsunami in Japan. According to Bernanke, only 1.75 million jobs have been created to replace the more than 8.5 million wiped out in the recession.

With the labor market so tenuous, it’s perhaps no wonder that debt levels remain a major consumer concern. The FSI found 24 percent of the population is less comfortable with their debt levels compared to a year ago. The number of people more comfortable with their debt level declined from June’s survey. This despite the fact that consumers actually owe $164 billion less on revolving credit accounts than in 2008, according to the Federal Reserve.

Eye on the budget

In the face of all this uncertainty, Americans may be budgeting their way to solvency. The FSI found 58 percent of people said they or their spouse track monthly spending against a budget.

“People are getting more frugal and paying attention to what they have to spend,” says Chris Ravsten, founder of Foxstone Financial Group in Denver.

But while the majority of Americans may keep a budget, that doesn’t mean they think their finances are in order. Only 14 percent of Americans feel more comfortable with their savings today than they felt one year ago, according to the FSI — the lowest comfort level this year.

“I would define budgeting as making sure you’re living within your means and that you are saving money for the future,” says Carrie Coghill, director of consumer education for FreeScore.com, a consumer credit information organization. “In my experience, only around 20 percent of people budget in this way.”

There are many strategies for budgeting, but experts say the best method is the one you incorporate into everyday life. The so-called envelope method is a tried-and-true example.

For the uninitiated, with the envelope system, a saver tracks expenses for one month. At the end of the month, it’s clear how much goes for various categories such as housing, food, transportation and bills.

From there, the consumer puts an allotted amount of money in an envelope for each area. Once that envelope is empty, spending for that category stops until the next paycheck.

In an age of email and texting, of course, a system based on envelopes may seem antiquated. So technology offers an upgrade. Some online banks allow customers to open several free accounts and name them according to their purpose. Even better, you can set up automatic withdrawals and deposits from your primary account to your various virtual envelopes.

“It just takes a little discipline for the first few months to get the knack of living by a budget, and then it becomes empowering to the point that you want to live within your budget to see how much you can save,” says Ravsten.

But the FSI also suggests many Americans aren’t budgeting because they believe in the future, but because they’re worried about it. “The overall Financial Security Index is down from 97.8 in June to 95.6 in July, the lowest reading since April,” McBride says.

The accompanying slideshow gives detailed results of the latest FSI survey, along with analyses by selected experts and advice to help consumers cope in these uncertain economic times.

The survey was conducted by Princeton Survey Research Associates International from July 7-10, 2011. Statistical results are weighted to correct known demographic discrepancies. The margin of sampling error for the complete set of weighted data is ±4.0 percentage points.