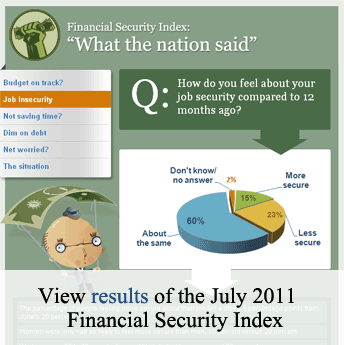 They would appear to be the lucky ones — the fortunate souls who are still employed years after the worst recession in eight decades knocked the U.S. labor market cold.

But in today’s enfeebled economy, anxiety isn’t just in the heart of the lonely job hunter. Bankrate’s latest Financial Security Index found a sharp increase in the ranks of people who might be described as “the working worried.”

When asked how they feel about their job security, a mere 15 percent said they feel more secure than a year ago. That was off a sharp 5 percentage points from June’s 20 percent.

Their numbers were easily eclipsed by the 23 percent who said they feel less secure about their job compared to a year ago. The less-secure figure was up a notch from June’s 22 percent.

Certainly, recent reports are enough to give anyone with a paycheck pause. In June, there were only net 18,000 jobs created across America. The anemic performance pushed the unemployment rate to 9.2 percent from 9.1 percent. Meanwhile, the Bureau of Labor Statistics also said its original estimate of 54,000 jobs created in May was overstated. It lowered the figure to 25,000.

The FSI poll also found a striking gender gap in job security. Only 10 percent of female respondents said they feel greater job security compared to a year ago. The figure for men was twice as high, at 20 percent.

A recent study by the Pew Research Center suggested women are right to be more concerned. From June 2009 to May of this year, men gained 768,000 jobs. Women, in contrast, lost 218,000 positions in the same time, the study found.

In other areas, the FSI found rising fears about inadequate savings, daunting debt loads and overall financial health. The following slideshow gives a comprehensive look at the FSI’s findings, and analyzes how the answers differed according to factors such as age, income and gender.