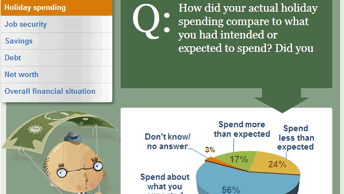 Consumers made their lists and then thought twice about excess spending over the holidays.

Only 17 percent of Americans spent more than they planned in November and December — that’s down a smidgen from 19 percent in 2010, according to Bankrate’s latest Financial Security Index.

Three out of 4 Americans exercised restraint. The majority, 56 percent, spent about what they planned, and nearly a quarter spent less than they expected.

The curbed consumer spending made for a good-but-not-great season for retailers. According to the National Retail Federation, Americans increased their end-of-year shopping by only 4.1 percent over 2010.

“On par, it wasn’t a bad holiday season. Holding their own or making a slight improvement is the best we can expect given the economy,” says CFP Robert Fragasso, CEO of Fragasso Financial Advisors in Pittsburgh.

Sticking to a budget

After four years of living under an economic rain cloud, Americans may be getting the hang of spending in moderation — or at least that’s true of some.

Statistics released by the Federal Reserve show that credit card use jumped in the holiday season. Revolving debt rose 8.5 percent from October to November after declining 2 percent in the third quarter of the year.

“This is just an assumption, but those who spent more than expected were the ones who bought on credit cards,” says Phil Cioppa, managing principal and chief investment officer at Arbol Financial Strategies in Norwalk, Conn.

Income played a large role in determining the way survey respondents answered the question on holiday spending — except for those who spent more than expected.

No matter what their income levels, the percentage of people who paid more for presents than planned was consistent, varying by only 5 percentage points on the high and low sides. About 1 in 5 (19 percent) people earning more than $75,000 accounted for overspenders, and 14 percent of those with incomes between $50,000 and $74,900 spent more.

That could indicate a core group of spendthrifts.

A 2009 study on the effect of the recession on consumer spending patterns by the marketing strategy firm Decitica found that about 22 percent of Americans fall into a classification they called apathetic materialists. They represent a group of spenders who report very little confidence in their ability to save money or resist the temptation to spend in the moment.

Not surprisingly, households with the lowest incomes were most likely to say they spent less than expected. With less elasticity in their budgets, people who earn less can least afford seasonal splurges.

“My take is not so much who is overspending or underspending but who is better at budgeting. It’s pretty consistent,” says Jason Whitby, CFP, MBA, CFA, senior financial adviser with Investor Solutions in Miami.

And the youthful appear to be more carefree with money. More than one-fifth of those between the ages of 18 and 49 spent more than they expected, but only 12 percent of consumers older than 50 say they did. For the 65-and-older crowd, 13 percent overspent.

Two-thirds of Americans at the affluent end of the spectrum, those earning $50,000 or more, were most likely to say their spending met expectations.

Overall, consumers set limits and stuck to them when doing their holiday shopping last year.

The findings mirror what CFP Lisa Fox, the director of financial planning at South Texas Money Management in Austin, Texas, has found with her clients.

“I find clients, due to the uncertainty in the markets and our economy, are paying more attention to their spending. When updating financial plans, the majority of my clients have not increased their overall spending from a year ago, and they are watching their budgets closely,” she says.

“We are noticing that clients today, much more so than in years past, are sticking to their budgets — not only for Christmas spending but with all aspects of their household spending, whether they are planning a new car purchase or budgeting for the number of dinners out each month,” he says.

The best way to begin budgeting is to track your spending for a month. Comparing what you actually spend in various categories versus what is affordable is a great way to begin paring down expenses and allocating resources wisely.

Of course, the most detailed and well-organized financial plan is nothing without the willpower to stick with it. Employing some tricks, such as opting out of the default checking account overdraft offered by your bank and leaving credit cards at home, can help keep spending in check.

Then there’s always the immutable option of cold, hard cash. It’s tough to spend more than you have when you simply don’t have it.