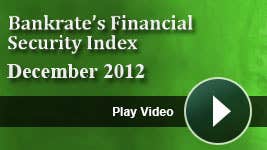 The economic benefits of the holiday spending season could be compromised by the threat of looming tax increases and spending cuts known as the “fiscal cliff.” Though most consumers say they are not limiting their spending due to these concerns, a third of Americans, 33 percent, have cut back on personal spending as a result of the budget showdown in Washington, D.C., according to Bankrate’s December Financial Security Index. This month, the index dropped to 95.6, the lowest of 2012.

“If that 33 percent each spend 10 percent less and the others spend the same, consumption goes down by 3.3 percent,” says Robert Barone, Ph.D., an economist and portfolio manager at Universal Value Advisors in Reno, Nev.

“The fiscal cliff can’t be making it better. Consumer confidence took a horrible plunge in November — but I can’t tell whether this was due to Republicans losing confidence because (former Massachusetts Gov. Mitt) Romney lost or because of the looming fiscal cliff. Probably some of both,” he says.

The survey respondents who did say that they have cut back on spending were much more likely to be Republican or Independent voters, at 42 percent and 38 percent, respectively, compared to 24 percent of Democrats.

Consumers earning less than $30,000 per year were more likely to say they have curtailed spending, at 43 percent, than the highest earning cohort. Only 25 percent of those earning $75,000 or more say they are spending less due to fiscal cliff concerns.

If Americans truly are spending less, it could be reflected in the gross domestic product, an indicator of how fast — or slow — the economy grows.

The fiscal showdown comes at an inopportune time of year. Retailers typically rake in the majority of their profits in the fourth quarter. In addition, Superstorm Sandy has diverted discretionary spending dollars to repairs of storm-damaged homes rather than gifts or dining out.

With several events conspiring to undermine consumer spending, teasing out the specific influences is complicated, according to Chris Christopher, a senior principal economist and director of U.S. and global consumer markets with IHS Global Insight, a global market information and analytics company.

Though most consumers ignored the tax and spending showdown all year, fiscal cliff fears may have started to drag on consumer confidence right after the election.

“Our analysis of Black Friday and online sales looks pretty robust. However, we do think that getting into the month of December that consumer spending won’t be as strong as it would be otherwise if the fiscal cliff issues weren’t around. People are not going to cut back completely, but they’re going to be a little cautious. One, because confidence is lower, but two, they’re a little worried that maybe coming into the new year, they’ll be paying higher taxes,” he says.

Nauta says taxes have been the main focus of his clients with regard to the fiscal cliff.

As resilient as consumers have been this year, tying up the loose fiscal ends in a neat bow before the end of the year would soothe economic fears — at least until the next crisis. Congress doesn’t have to put it under a tree, but resolving the problems would be a nice year-end present for everyone.