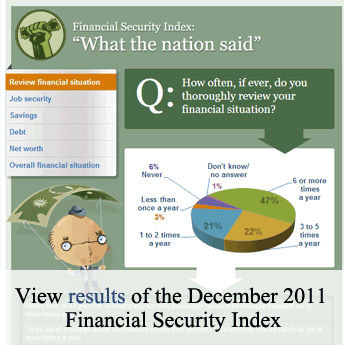 Are Americans internalizing the “happy holidays” message? Last month, it didn’t seem to be the case. But in December, Bankrate’s Financial Security Index shows improvement in every component from job security, savings, debt and net worth to Americans’ overall financial situation.

Despite the improvement, the Financial Security Index, at 95.8, is still below 100, indicating consumers overall are experiencing less financial security than a year ago.

“2011 was not a year of progress in terms of consumers’ financial security,” says Greg McBride, CFA, senior financial analyst for Bankrate.com. “Each component — job security, savings, debt, net worth and overall financial situation — ended 2011 lower than where it was in January.”

Below are some highlights from December’s survey, which asked individuals how they felt about the different aspects of their finances compared to 12 months ago.

Each month, Bankrate also asks a “wild card” question related to personal finances. This month, we asked Americans how often, if ever, they thoroughly review their financial situation. Sheyna Steiner’s story, “Americans review personal finances often,” reveals consumers may in fact be obsessive-compulsive about checking their finances — that is, if they are to be believed.