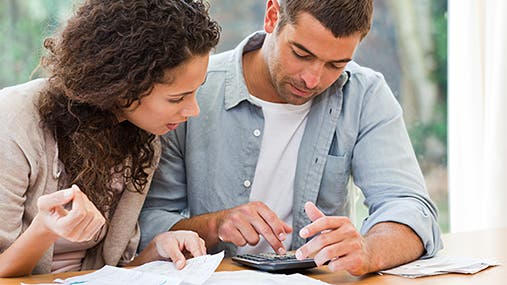 When a spender marries a saver, financial fireworks can ensue, and not the good kind. Should the duo combine accounts to minimize stress and create a new life together — or keep separate accounts to maximize options and retain financial autonomy? Or, maybe try a mix of the two?

We spoke with financial counselors, marriage therapists and individuals about each approach and received these tips.

Neal Flesner, a 35-year-old management consultant in Los Angeles, maintains a separate account from his wife. “I have my set of bills, and she has her set of bills,” he says. “It works.”

When the two tried a joint checking account, they found it challenging to track who’d written the last check or how much money was left for separate ATM withdrawals.

Create a news alert for
"checking"

With split accounts, they can access their own discretionary income and it hasn’t created a complicated algebra of secretive purchases or stingy spending. Flesner says he still checks in about expensive buys, such as a new bike, and often picks up restaurant tabs, as his income is greater. When a recent electricity bill spiked due to heavy air-conditioning use, Flesner and his wife talked over how to deal with the problem and lower the monthly bill.

Couples who cooperate in this way earn financial and emotional rewards, says Tina B. Tessina, psychotherapist and author of “Money, Sex and Kids: Stop Fighting About the Three Things That Can Ruin Your Marriage.”

“When a couple can talk openly about how they’re handling their money, even if they keep certain accounts separate but have knowledge about them and access to them, it indicates that they are open about most things in their marriage, which predicts success,” she says.

Separate checking accounts earn additional relationship benefits when the couple sets up a joint account for paying mutual bills, says financial adviser Tony Aguilar, founder of Austin, Texas-based Amiti Advising. The joint account can be funded 50-50 or weighted according to income. But he recommends a joint credit card for entertainment and “fun” spending, so the miles and points can add up toward free airline tickets or a getaway.

Tessina says a hybrid setup of separate and joint accounts can minimize disagreements. “As long as no one is overdrawing an account or a credit card, and bill-paying and savings are covered by the joint account, they don’t need to be concerned about who spends more on clothes or who (spends more) on meals out,” she says.

“You always have to be accountable to the other person,” which is beneficial, she emphasizes. “It forces us to discuss every major purchase to determine if it’s something we truly need and whether it’s the best financial decision for our family.”

Desfosse and her husband stick to a predetermined budget. If one of them wants to buy something not included in that month’s budget, the couple discusses the purchase.

But joint checking accounts can create problems, if a spendthrift watches a partner splurge or if an earn-and-spend personality feels constantly criticized by a saver. They also can disagree on the items they want to buy. For example, she may like collecting vintage figurines while he wants to spend hundreds on a high-end barbecue. These differences can lead to resentment.

“It’s less complicated and forces you to discuss how you want to spend money,” she says. “You don’t have to agree on everything.” But with a joint account, there’s no way to sweep financial disagreements under the rug.

To support some financial independence, O’Neill says each partner is allowed freedom to spend up to a certain amount. Over that amount, it becomes a point of discussion, pre-purchase.

No matter which checking account approach is used, experts agree that openness and discussion are the keys to success. Tessina suggests weekly meetings for planning social events, conversing about financial goals and balancing the checkbook.

With the right attitude, this meeting can be a date. Combine it with a late-Sunday morning pancake breakfast or pair it with wine and cheese after the kids go to bed, Tessina says.

“As you talk about positive solutions and setting out long-term goals, many financial and other problems will be solved as they arise and before they become difficult,” she says.

Taking account differences to a professional also may be necessary. Like an iceberg in a relationship, the tip juts out in the form of “money troubles,” but beneath it a giant behemoth of power, security and family issues lurks. A professional financial planner or counselor can help couples sort out the logistics of expenses, income, and checking and savings accounts.

With support, a couple can start down the right path together, establishing strategies of communication and motivation. “Much of finance isn’t necessarily about numbers but about habit,” Aguilar says. “If you establish the right habits early in life, everything else is going to work out for you.”