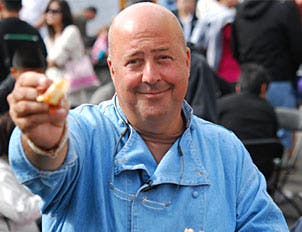 Andrew Zimmern eats ghastly stuff for a living. As host of the Travel Channel’s “Bizarre Foods” and “Bizarre World,” the James Beard Award-winning TV chef and food writer graciously samples whatever his hosts place in front of him, be it roasted bat in Samoa, raw camel kidneys in Ethiopia, cow-urine tonic in India or good ol’ American roadkill. When he’s not munching on giant flying ants in Uganda, hosting his online series, “Appetite for Life,” or writing his new book, “Andrew Zimmern’s Field Guide to Exceptionally Weird, Wild, and Wonderful Foods: An Intrepid Eater’s Digest,” you’ll find this busy epicurean chilling and grilling at home near Minneapolis with his wife and son.

What were your salad years like? Did you work your way up from the dish room?

I did, but it was an easier place and time to do it. When I was in college and found myself with some time off, I went to Europe and knocked on some famous kitchen back doors and went to work for six months at a time, basically in exchange for room and board. Those experiences were available to be had. In 1980, I was in Paris, and I was working in a three-star Michelin restaurant there. I wasn’t really working, I was volunteering. But I was working hard 14 hours a day at this place, and there were just two or three other people over the course of the four or five months I was there who even knocked on the back door and sought employment. Today, The French Laundry (restaurant) in Northern California gets 10,000 applications a year. It’s a whole different world. 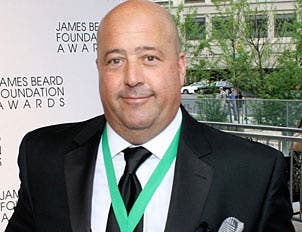 Where did you acquire your taste for bizarre food?

I don’t find it bizarre; I eat what people are eating in the places I go. We don’t gin anything up; I don’t grab a quart of Dumpster juice from the mall and bring it in and say, ‘Oh, look what I’ve found!’ We go to places and tell stories about the cultures through the food.

What inspired you to bring ‘Bizarre Foods’ to TV?

I was taking a freshman art history course at Vassar (College), and the teacher put a slide on the wall and said, “Write down everything you see in it.” And I wrote down the 10 objects that were in this 16th century northern European portrait. She then spent the next 45 minutes of class telling us everything she saw in that picture, and she basically could tell the story of 16th century Flemish life just by what she intuited from that picture. Six months later, I was working in a restaurant in Europe, and I realized that the same stories could be told through food that could be told by looking at a painting. 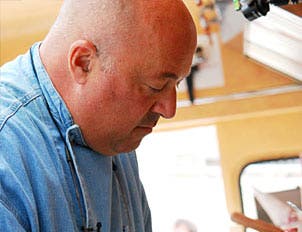 When you’re not eating bizarre foods, how do you splurge?

I spend time with my family; that’s the rarest commodity I have. My son and my wife pursue foods that we’re not able to eat at home, so we’ll go to a handful of chef-driven restaurants here in the Twin Cities, tiny little ethnic places that are very special to us because we’re not able to make Korean barbecue or sushi or Thai soup that we love as good as (what) the chefs (make) at those places.

Is there anything you won’t eat?

I have eaten everything that’s been put in front of me, and there have been many times that I’ve spat something out. I remember in Belize trying the stinking-toe bukut, a nasty fruit, and taking a taste of that and trying to take another one and spitting it out. I’m a better guest than most people though, so if someone has taken some pride in growing something or buying something or cooking something for me, I try to respect that and take a couple bites of it. But I can remember several times where it was near-impossible to keep it down.