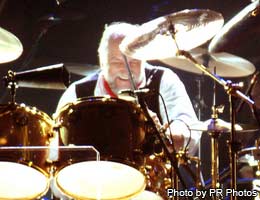 Creative success: When not hopping from bed to bed and enduring tumultuous breakups that would have even the “Jersey Shore” cast quaking in their tans, the members of Fleetwood Mac, including drummer and namesake Fleetwood, were creating some of the biggest hits of the ’70s. Their 1977 album “Rumours” remains one of the best-selling albums of all time.

Financial failure: While Fleetwood should have, by all rights, been a millionaire many times over throughout the ’80s, he was done in by two oddly juxtaposed desires — cocaine and real estate. His love for the former and bad judgment on the latter led him toward bankruptcy in the middle of the decade. By the ’90s, though, he had reportedly turned his life around, including quitting drugs and developing a trusted team of financial advisers. He’s toured and recorded in recent years with Fleetwood Mac and his own Mick Fleetwood Blues Band.