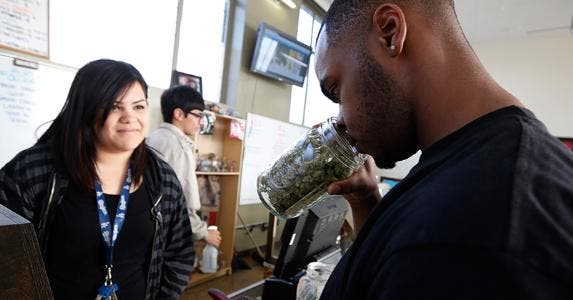 More than 20 states now permit the retail sale of marijuana to at least some consumers. But those who want to purchase weed where it’s state-legal often will need to bring cash because many of the retailers that sell the product operate outside the U.S. banking system.

That’s because federal law still classifies marijuana as an illegal substance, says Rob Rowe, vice president and senior counsel of the American Bankers Association, a banking industry group in Washington, D.C. Under federal law, the possession or use of marijuana is illegal in all U.S. states.

Banks are heavily regulated and their interactions with marijuana businesses could run afoul of not only the federal Controlled Substance Act, but also several other federal statutes. That would present significant risks should they decide to accept marijuana businesses as customers.

“Since all banks are subject to federal law, they’re unable to offer any banking services to marijuana business,” Rowe says. “That means marijuana services don’t have access to checking or savings accounts, loans or any type of card services. The only payment mechanism left without access to the banking system is cash — plain and simple.”

Credit cards and debit cards aren’t an option because a merchant must have a bank account to accept deposited receipts from such transactions.

More On Banking And Marijuana Shops:

The dilemma of pot shops might go away in the coming weeks. The U.S. House of Representatives has passed a measure that bars Treasury and securities regulators from spending money to penalize banks that provide services to legitimate marijuana businesses. It has yet to go before the Senate.

Breaking into the banking system

“(That’s) an inconvenience to their customers,” West says.

Ways into the banking system include personal bank accounts, holding company bank accounts and creative business names that might obscure the business’s true nature, at least for a while.

“Generally, these are temporary solutions at best,” West says. “Usually what happens is a business gets set up with a bank, then it’s doing fairly large amounts of cash transactions and that raises flags with the bank compliance officers. And then they end up getting their account shut down.”

Rowe confirms that such accounts are likely to be denied or terminated once the bank gets wise to the true type of business. “Banks are increasingly closing accounts when they detect it’s a marijuana business,” he says.

Another workaround, though less satisfactory, is the installation of an ATM on the premises or nearby.

“To the extent that cash is needed, an ATM is certainly a prime location for customers of all types of goods to get cash. The wide availability of ATMs is all about convenience for customers,” he says.

Cash isn’t an issue only for the customers of marijuana retailers. These businesses also pay their employees, utility bills and even their taxes in cash, which adds up to a lot of cash on the premises and considerable security risks.

The implications for customers include not only the inconvenience, but also constraints on how much time and energy that owners and operators have to focus on their businesses, West says.

One federal government agency has tried to address the issue. The Financial Crimes Enforcement Network, or FinCEN, writes regulations intended to help protect the U.S. financial system from money laundering and terrorist financing.

Banks generally took a dim view of this approach.

The bottom line is that marijuana businesses would like to operate within the U.S. banking system and accept checks, credit cards and debit cards, as well as cash, for purchases of their products.

However, they might have a long wait since banks likely won’t open their doors to them unless multiple federal laws are changed.

“When coupled with extremely heightened expectation for scrutiny of the customer and the extremely risky nature of the business from a legal perspective, banks have elected to just say no,” Rowe says.