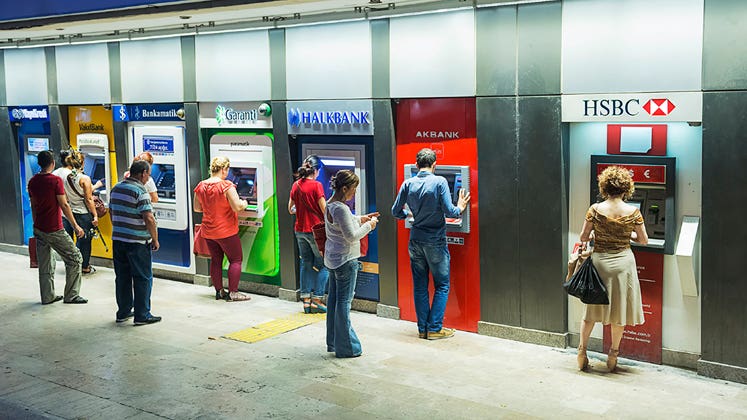 ATMs are something we take for granted in the U.S. With more than 400,000 machines operating nationwide, it’s a safe bet that most Americans live within a few minutes’ drive of an ATM.

But the picture in other countries is much different.

Let’s do a thought experiment, using data from the International Monetary Fund. Say every man, woman and child in the U.S. needed cash at the same time and somehow got evenly distributed into lines at the nation’s ATMs. Assuming everyone needs about 2 feet of space to feel comfortable, the line to each ATM would be about 1,500 feet long. 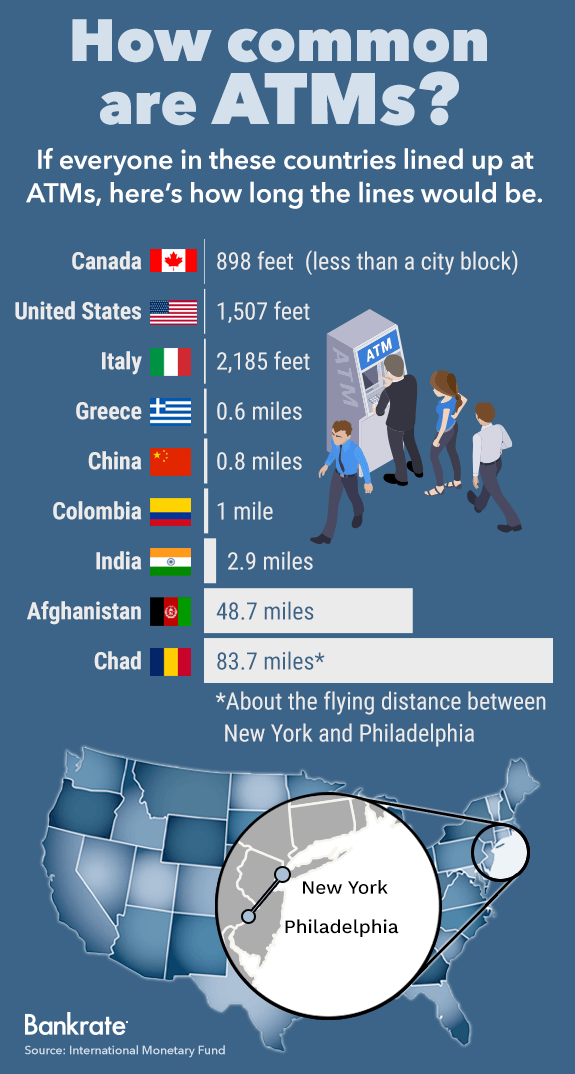 That’s one heck of a long line, but the lines would be much, much longer in other countries, including many popular tourist destinations.

For instance, in Barbados, the ATM lines would stretch more than a mile (5,398 feet) apiece.

And in Chad, which the IMF says has the lowest ATM availability in the world among the countries it measures, the line would stretch more than 83 miles. For a frame of reference, that’s about the distance between New York City and Philadelphia.

Canada can add yet another trophy to a case that already includes “largest producer of maple syrup” and “inventors of poutine,” because it would actually have the world’s shortest line, at approximately 900 feet.

What’s in an ATM (besides cash, obviously)?

All this raises the question: Why does the IMF track ATM access at all?

An IMF spokeswoman pointed me to this explanation on the organization’s website :

What that boils down to is that ATMs, along with other bank data, are a good way of understanding how much access regular people have to financial services, which can have a big effect on whether a country can develop economically, says Amadou Sy, director of the Africa Growth Initiative at the Brookings Institution in Washington, D.C.

“The payment system is often overlooked, but it’s really one of the key cornerstones of a financial system,” Sy says. “It’s like the plumbing — typically nobody looks at it unless you have a plumbing problem.”

Sy says that not having payment infrastructure like ATMs can be a symptom of wider economic problems.

“Lack of access to finance is a barrier to economic development, to entrepreneurship and so on,” Sy says. “In many developing countries, you have a problem where a lot of people are just outside the formal banking system.”

ATMs are a traveler’s best friend

While lack of a large national network of ATMs can harm a country’s residents, it’s usually not a problem for tourists, says Pauline Frommer, editorial director for Frommer’s travel guidebooks.

Even if a country has few ATMs overall, those they do have will probably be clustered around landmarks and business districts that travelers are likely to visit, Frommer says.

That’s good, because one of the dumbest things a tourist can do is carry around a lot of cash.

“A lot of travelers make the mistake of carrying too much cash on their person, and that’s why they’re the target of pickpockets,” Frommer says. “If you can just use an ATM as you go along, if something goes wrong — if your wallet gets stolen — plastic can be replaced. Cash cannot.”