Will your credit card work abroad? 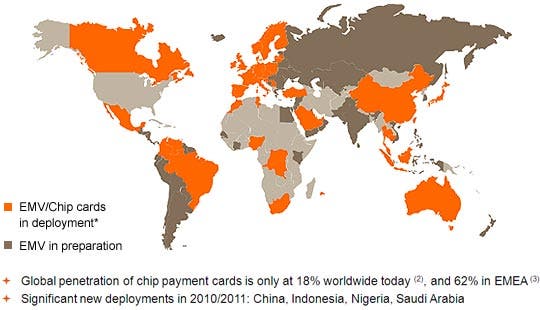 Traveling abroad this summer? Don’t be surprised if your credit card gets the occasional rejection. In Europe and in other countries around the world, chip and PIN or EMV-enabled cards are the norm. These cards use a microchip and a personal identification number to validate transactions instead of a cardholder’s signature. Rather than swiping the magnetic stripe through the card reader, consumers insert the card into the machine and enter the PIN stored on the chip.

EMV, named for its original developers Europay, MasterCard and Visa, is the global standard for chip-based debit and credit cards. As of 2009, there were more than 944 million EMV-compliant chip-based payment cards in use worldwide, according to the standards body, EMVCo.

The chip and PIN system is becoming the dominant card payment platform, notes Jack Jania, vice president and general manager of secure transactions for Gemalto North America, a digital security firm. He says that more than 22 countries have adopted or are in the process of adopting EMV.

As the map of chip and PIN use shows, the United States is not one of those nations. Just one U.S. card issuer, the United Nations Federal Credit Union, has announced that it will provide EMV-enabled cards later this year.

* China utilizes the “China Union Pay” standard, which is an EMV-compatible standard

While most chip and PIN card readers can still read magnetic stripe cards, travelers may have trouble using their credit card at self-service payment kiosks that don’t recognize cards that don’t have a chip, such as unattended ticket machines in train stations, parking meters, parking garages, tollbooths and gas stations where customers pay at the pump.

You might even have trouble paying in person. “EMV has been prevalent in Europe for so long some of the cashiers don’t see mag-stripe cards often,” says Jania. Younger or poorly trained staff may not know how to process chipless payment cards.

Even if they know the procedure for non-EMV-enabled cards, some merchants might refuse those cards as payment because they “either think they cannot accept non-chip and PIN cards or have taken a business decision not to accept them,” Mark Bowerman, spokesman for The UK Cards Association, said via e-mail.

The reasoning, Bowerman says, is likely based on the mistaken belief that they would be liable for fraud committed with magnetic stripe cards. “The fact is that as long as the retailer makes sufficient checks along the lines of those in place before we had chip and PIN, then the liability for any fraud on non-chip and PIN cards lies with the bank and not the retailer.”