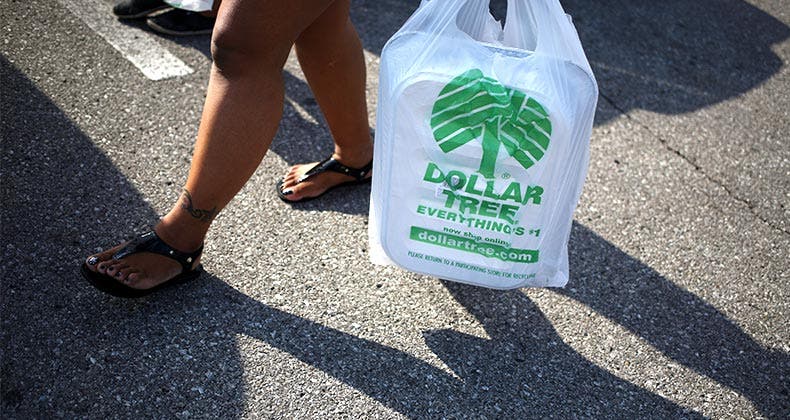 Consumers love using credit cards for big purchases, but more are also using them to charge small items, according to a new CreditCards.com survey.

In a national telephone survey of 674 credit card holders, 17 percent said they typically use credit cards for in-person purchases of $5 or less — up from 11 percent in a similar survey done in 2016. The number of cardholders who prefer cash (55 percent) and debit cards (24 percent) for small transactions each fell by 3 percent since last year.

“There was a time when you just didn’t use your credit card for certain kinds of purchases,” said Susan Herbst-Murphy, consumer credit and payments industry expert at the Federal Reserve Bank of Philadelphia. “That has changed.”

This year’s survey also asked cardholders what payment methods they prefer for single purchases of $500 or more. Fifty-seven percent used credit cards most often for their large spends in the past 12 months, while 42 percent relied on cash, debit cards and checks (the remaining 1 percent did not respond.) That would suggest many consumers are leaving money on the table by skipping over their credit cards — and the rewards and protections they may offer — when making big purchases.

Here’s what our survey revealed about consumers’ favorite ways to pay for small and large purchases:

The scientific survey of 1,001 consumers, including 674 who have credit cards, was conducted March 16-19 via landline and cellphone. (See survey methodology below.)

The embracement of credit cards for small purchases indicates a shift away from cash in American society. According to the Federal Reserve, 32 percent of retail payments were made with cash in 2015, down from 40 percent in 2012. As consumers eschew folding green and coins, it’s become more common than ever before to pay with plastic for small items such as a pack of gum, a lottery ticket or a cup of coffee. Using a debit or credit card would have been considered unnecessary or even annoying in years past.

“It’s become much more socially acceptable to go cashless,” said Utpal Dholakia, a marketing professor at Rice University, who studies consumer behavior. “I have less than $20 in my wallet because I hardly ever use cash.”

More-widespread card use isn’t just a cultural shift. Experts say it reflects the evolution of the payments industry over the past several decades. Since credit cards were introduced in the ’50s, consumers have been provided with more ways to pay, and stores generally accept all of them.

Herbst-Murphy of the Philadelphia Fed noted the number of card-accepting merchants has exploded since the mid-1990s. Additionally, new non-cash payment products have emerged with each respective generation of consumers. Credit cards became popular as baby boomers — people born from 1946 to 1966 — came of age. Debit cards gained steam in the ’80s and ’90s, as many Gen-Xers went off to college, entered the working world and started families.

In our survey, twice as many Gen-Xers used debit cards for large purchases as baby boomers. Boomers were the age group most likely to use credit cards for big-ticket items. But they’re not quite on board with using credit for small items — likely a habit held over from a time before you could use cards everywhere.

“The habits that are established early in a consumer’s lifetime, at least where payment methods are concerned, tend to last throughout their lives,” Herbst-Murphy said.

Not everyone is sold on using credit for big buys

Credit cards were the clear favorite payment method (57 percent) for purchases of $500 or more, among all age groups, according to the survey. That’s no surprise since credit cards can allow you to spread out large payments over time, and many offer purchase protection and other features. But there are still many cardholders (42 percent) who lean on debit cards, cash and checks for their high-dollar buys.

Meanwhile, credit card rewards are as plentiful now as they’ve ever been. For example, Chase was until recently offering 100,000 bonus points to new users of its Sapphire Reserve card who could meet a $4,000 spending threshold within three months (and pay a hefty $450 annual fee). Chase has pared down the offer to 50,000 points — a move countered by American Express with a 60,000-point bonus on its Platinum card.

Rewards and cash back can deliver huge savings on almost any purchase, but it often takes a bit of homework to get the most value from card perks. Many cards have revolving reward and cash back categories, and points and miles often must be redeemed via issuer portals online.

“Consumers have a lot of things they’re juggling in their lives,” said Marc Bellanger, senior strategy director for financial services at Merkle Inc., a firm that develops marketing programs for banks. “The question is how much bandwidth or mindshare they have to dedicate to determining the best rewards value proposition. A lot of consumers figure that out, but I also think there are a lot who don’t.”

There’s also evidence that some cardholders are finding rewards difficult to use. The Consumer Financial Protection Bureau said in a March report it received complaints from consumers who were unable to take advantage of rewards even after fulfilling their issuers’ requirements. The agency also said some consumers had received information from customer service representatives about rewards that contradicted what was in their online accounts.

A reluctance to charge big purchases could also reflect a conservative approach to personal finance for some consumers. Bellanger said many may still be debt-shy in the wake of the Great Recession. Millennials and Gen-Xers may be feeling that more than older groups, since they are more likely to use debit cards for big purchases. Young millennials (ages 18-26) were the group least likely to put items of $500 and up on credit cards.

“We’ve seen things that say millennials, even more than other generations, are shying away from credit cards,” Bellanger said.

Don’t be that person who pays with … cash?

Despite misgivings some consumers have about using credit cards — whether it’s debt aversion, rewards confusion or other concerns — it’s become easier to pay for just about anything with plastic than cash. Swiping or dipping a card is usually quick and painless, whereas breaking bills and counting coins can be checkout-line killers. Mobile payments could make cash even more scarce, if providers can resolve consumer concerns over security and convenience.

“The pain of paying with mobile is going to be less than paying with a credit card,” Rice University’s Dholakia said. “You’re just clicking a button and, in a couple of seconds, your payment is done.”

CreditCards.com commissioned Princeton Survey Research Associates International to obtain telephone interviews with 1,001 adults living in the continental United States. Interviews were conducted by landline and cellphone in English and Spanish by Princeton Data Source from March 16-19, 2017. Statistical results are weighted to correct known demographic discrepancies. The margin of sampling error is plus or minus 3.8 percentage points for the full sample, and 4.7 percentage points for the 674 credit card holders.

See related: Digital wallets: Merchants to pave the way for consumer acceptance, What millennials can teach us about credit