Although trading trousers for swim trunks sounds appealing, Americans are reluctant to give themselves a break from the daily grind.

About 31 percent of American workers with paid time off don’t intend to use all of it, according to a recent Bankrate survey. Heavier workloads and a lack of money are two of the biggest reasons they aren’t taking time off.

Although there has been a recent trend of companies offering more generous and flexible vacation to employees, like unlimited paid time off, Americans aren’t taking full advantage. Not only is it costing workers their general well-being, it’s also costing the economy billions of dollars each year. 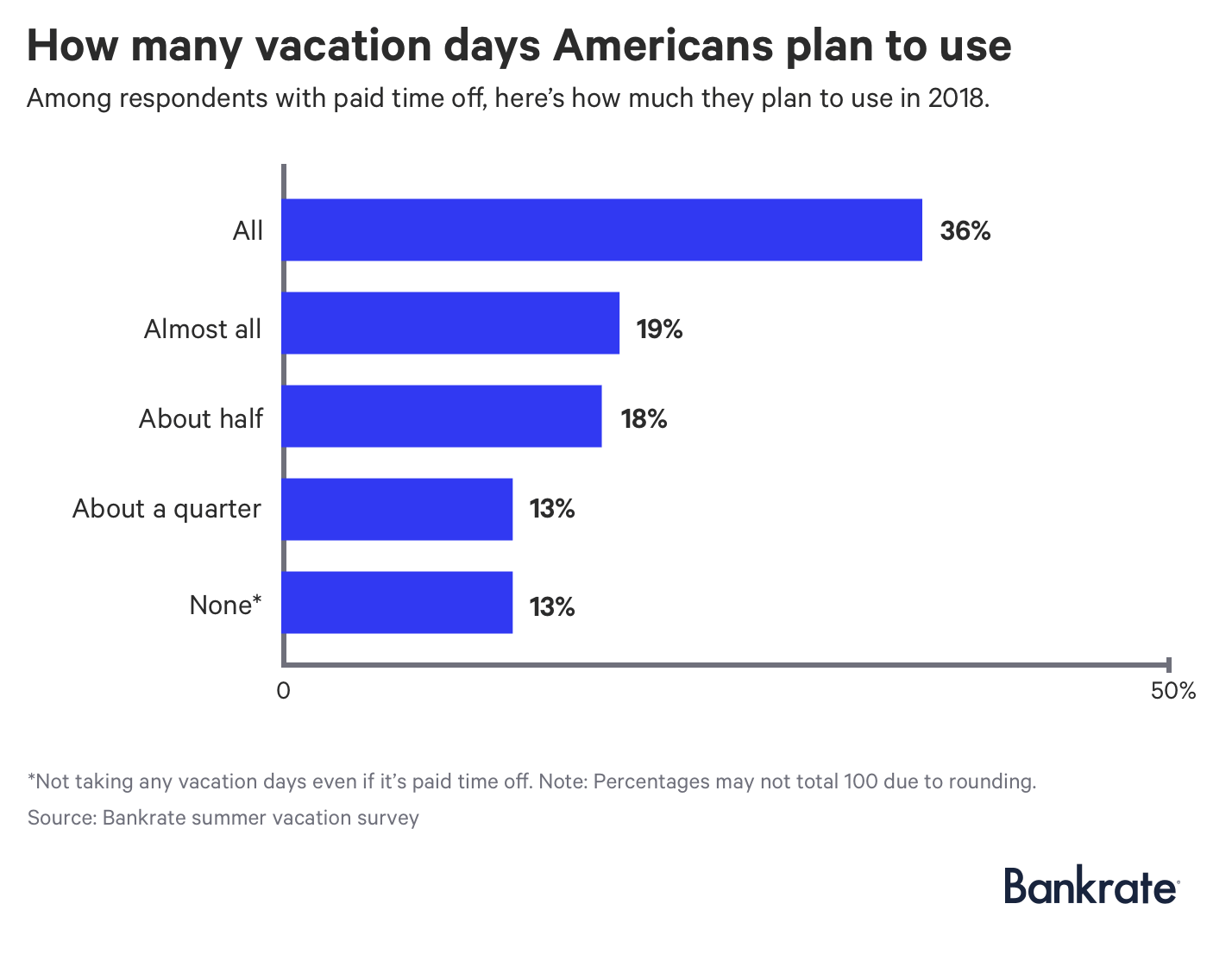 Americans refuse to use their paid vacation days

Marisa Eikenberry, a 26-year-old media worker from Indianapolis, doesn’t use all of her vacation days. She never has. Growing up, she never wanted to miss a day of school; not because she loved it, but because, as she puts it, she worried about being “penalized” for not showing up.

“Perfect attendance is seen as the goal,” she writes in an email. “(By missing a day) you miss instruction that puts you behind. I hate feeling behind.”

Her fear of missing out has seeped into her career. At her first job, Eikenberry was given five paid vacation days. She voluntarily took zero. This year, she has taken only three of her 10 paid days off.

“I fully recognize that it isn’t healthy and in general I am probably a more tense individual than most, but …” Eikenberry writes. “I don’t really know any different either.”

She isn’t alone. According to a survey by Project Time Off, the average American employee receives 23.2 paid time off days. On average, only 17.2 vacation days are actually used.

The study finds that employees with unused vacation feared that taking time off would make them appear less dedicated or replaceable. They also felt their workload was too heavy to get away or that there was a lack of resources available for their jobs to be covered in their absence.

“People like me end up putting ridiculous pressure on ourselves to measure up to these business leaders that seem to always be working,” writes Eikenberry. “And when we’ve always been like that, it’s hard to break that mold.”

Not taking time off hurts employees, employers and the economy

The Project Time Off study also reports that in 2017, Americans forfeited 212 million paid time off days, equivalent to $62.2 billion in lost benefits. It cost the economy $255 billion in missed opportunity and could have generated 1.9 million jobs.

“The economic benefits are certainly not why people go on vacation, but there is a massive economic boom we could get (from people taking time off), says Katie Denis, lead researcher and author of the study.

On top of that, employees could gain back wages lost from sticking around the office. On an individual level, each employee donated an average of $561 in work time to their employer in 2017.

“We are essentially volunteering for our employers,” Denis says. “When we don’t take the vacation we’ve earned, we’re just giving money right back to them.”

Wearing down on body and mind

Not taking time off also negatively impacts health. A 2015 study shows that overwork puts individuals at high risk of incident strokes. Another study shows that sleep deprivation, a common side effect of overwork, is linked to cardiovascular disease, diabetes, obesity and more.

Even taking short vacations can help combat the negative health effects. But the evidence still isn’t enough to persuade workers like Eikenberry to unplug.

“I would just end up worried that I’m missing something,” Eikenberry says. “Worried that someone will need me and I’m not there, or end up doing a bunch of housework.”

Kelley Kitley, a licensed clinical social worker, says the majority of her patients come to seek treatment for symptoms of burnout. Most of her clients work 60-80 weeks with little time off — and they often suffer from symptoms like insomnia, anxiety, low mood and weight gain.

To treat these symptoms, she charges patients $250 for a 45-minute session. As a cognitive behavioral therapist, she sees her patients for an average of 16 sessions; she doesn’t accept insurance. The total average bill for her patients dealing with the mental effects of burnout? $4,000.

The physical, mental and financial disadvantages of not taking time off are stark. For workers feeling the onsets of burnout, Kitley recommends taking three steps to avoid fallout:

1. Evaluate your time. Kitley advises patients to break down their day by activity and record how much time each one takes. By visualizing time spent in graphic forms, like a pie chart, she finds that her patients are able to better identify and be aware of how much is actually on their plates — and pinpoint what’s off balance.

2. Identify where you can take small “time outs.” If workers can schedule time to go to a fitness class or take a 10-minute walk during the day, Kitley finds that it improves their mood and energy levels. She stresses the importance of allocating time for it on their calendars so they’re held accountable.

3. Create a plan and stick to it. It takes 21 days to develop a habit. Kitley says that the more successful workers are with repetition of creating time for themselves, the easier it’ll be for them to build upon it.

As for Eikenberry, she’s grateful that she hasn’t needed to seek professional attention for adverse mental or physical consequences of not taking time off. Ways she copes? Binging on “Desperate Housewives” or cooking.