Ashleigh Koval is on a mission to build what many of us find elusive: a $1,000 emergency fund. Instead of settling on when and how much to move into her savings account, the retail banker decided to try something fresher earlier this year to hit her goal—a savings app offered by her employer that settles the matter for her.

In a little more than two months, Koval saved $800 through Dobot, an app that plugs into her checking account to identify — and move — small amounts of money that its algorithm believes she can safely save every few days.

She credits the early results to the encouraging touches, like how the app visualizes her progress, and how she doesn’t have to think about the chore.

“You go to Dobot and you’re like ‘oh my gosh. I have all of this money. Where did this come from? Oh, that’s right, it just automatically transfers,’” says Koval, a retail personal banker at Fifth Third Bank in West Chester, Ohio.

The relaunch of Dobot represents a trend roaring across financial services — banks and fintech companies are rethinking traditional bank products to try to win over new customers by solving specific financial problems. Some help you pay down college debt while others help you avoid overdraft fees.

Dobot — and others like it such as Digit or Qapital or an auto-savings tool from USAA — are trying to address a problem millions of Americans encounter: While savings account options abound, what’s in them is regularly not enough to cover a $1,000 emergency.

The changing competition means you get more account options that can help improve your financial health in numerous ways.

Why banks are helping you save more, spend less

The list of what banks have done digitally to help you fix your finances is already long — and it’s growing.

Consider the recent evidence. Huntington Bank, for instance, recently rolled out a feature designed to help customers save more money and manage their spending, among other things, and plans to do more. Nbkc bank based in Kansas City, Missouri, ran a program for early-stage financial technology startups last year in a quest to unearth and nurture technologies that help solve financial problems for everyday Americans — the savings crisis included. Heck, even financial giant Blackrock recently announced that it teamed up with nonprofit organizations to whip up ways to inspire people to build emergency savings.

Such investments show that companies are doing more to woo customers than merely slapping competitive rates on their products. And as more consumers manage their money online and require more help, it can be a key competitive advantage.

“The market used to compete on a single number,” says Ryan Falvey, managing partner of Financial Venture Studio, a seed-stage venture capital firm for fintech companies. “Now, we are competing in color schemes, design innovation, non-human service layers and how you can use really sophisticated technology to help predict things for people.”

One of the major forces driving that change is fintech companies have become more mainstream. Five years ago, a fintech app boasting 25,000 users would have been impressive. Now, Falvey says he wouldn’t bat an eye at those numbers. In fact, some like mobile bank, Chime, count more than three million customers.

But it’s not only competition that’s driving banks to rethink their traditional bank accounts online to help improve customers’ financial well-being. It’s because we, their customers, are asking for such functionality.

A heads up from Huntington Bank

For months, Huntington Bank quizzed its customers about what was on their minds financially. In time, a pattern became clear: People wanted a digital banking experience that mirrored what they were thinking about—features that would address their emotions of feeling stressed about money and desiring some proactive help.

“That kept coming out over and over and over again,” says Andy Harmening, senior executive vice president and director of consumer and business banking at Huntington.

So, Huntington did something about addressing those wishes in the digital banking platform it started rolling out to customers last year and continues to enhance. Most recently, the bank announced Heads Up, a feature that predicts what a customer can afford to spend, when a restaurant or merchant mistakenly double charges your card and more. The hope is that such features help customers manage their money more effectively — whether it’s related to savings or something else.

Even Harmening got a surprise when he tried the tool.

“Literally, the first day it turns on, I get my last three phone bills and it showed me these phone bills because my phone bill went up $50,” he says, adding that he called his provider to make an adjustment.

Now, Huntington is watching to see which features appeal most to customers and will modify them as needed.

“I think personally, over time, it’s going to be a game-changer for the consumer,” Harmening says.

What these new digital bank features mean for you

Certainly, we need some kind of financial help. Many of us still view saving a few hundred dollars as a fanciful notion.

While we may need more income to solve our cash-flow problems, there are plenty of people in the business who believe that rethinking how the traditional bank account operates can also help address this thorny issue.

Consider Dobot, for example. Like a handful of others, the app is designed to make savings feel less intimidating so that it gets done slowly but surely. Beyond automating the savings through an algorithm, the app asks you to focus on your specific goals.

“That’s something we all like to talk about,” says Andy Zurcher, who leads the Dobot team at Fifth Third and was one of Dobot’s first employees.

So, when you use the app, you establish one goal (or several). You’re encouraged to attach a picture to them. To keep you focused on your savings goal, Dobot sends you playful messages and other encouraging flourishes.

While the Dobot account doesn’t pay interest, the app is meant to help you jumpstart a savings habit — arguably the greater value when you’re just getting started. You’ll probably cash out when you hit the goal, but Zurcher hopes the experience helps users refine their spending and savings habits in time.

Only time will tell how apps like this one work to improve someone’s financial wellness. It’s early days and plenty of personal finance tools have flopped in the past. Not all of us feel comfortable sharing data with apps either.

But regardless, technologies like these are pressuring banks and others to compete in newer ways, which ought to bode well for you.

“You are getting more choice, but also more importantly, you are starting to get better products and products that appeal to you,” Financial Venture Studio’s Falvey says. 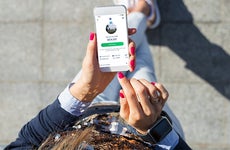 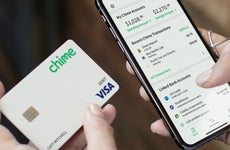 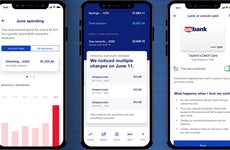 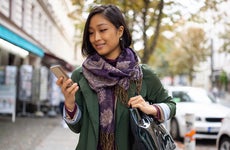 5 mobile bank apps that help you save money