Americans are leaving lots of money on the table when it comes to their savings.

Interest rates on deposit products are on the rise, but a recent Bankrate survey shows that very few Americans are taking advantage of them.

Only 6 percent of Americans surveyed are earning more than 2 percent APY on their short-term savings. And just 12 percent are earning between 1.51 percent to 2 percent.

There are a number of low-minimum balance savings options with a high APY available, including multiple accounts offering at least a 2 percent yield. Do your research and compare accounts to put your savings to work for you. 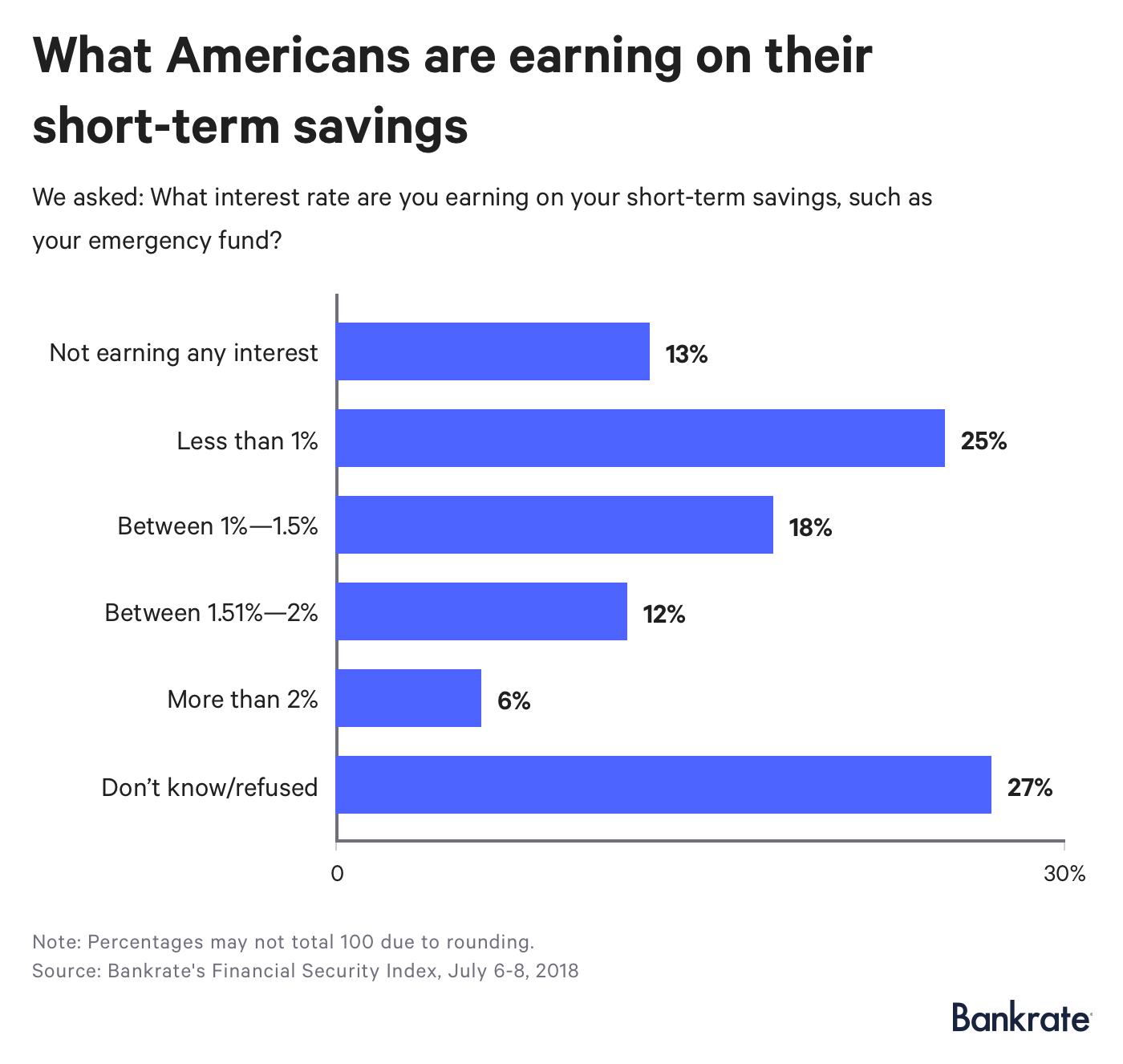 Inflation was 2.3 percent in June, according to the latest reading available from the Bureau of Labor Statistics. While no savings accounts or money market accounts currently earn enough to match inflation, you can find accounts that come close. (There are 1-year CDs paying up to 2.55 percent.)

If you’re among the 25 percent of Americans earning less than 1 percent APY on your savings account, and inflation is more than 2 percent, you’re losing at least 1 percent per year in purchasing power.

“You work hard to squirrel away $1,000 for a rainy day, you want to make sure it still buys $1,000 worth of stuff when you need it,” says Greg McBride, CFA, Bankrate’s chief financial analyst. “… Over time, that loss of buying power is just as damaging as a loss of principal.”

Why savers are leaving money on the table

Comfort level with their current financial institution (36 percent) is the top reason cited for not opening a higher-paying account with an online-only bank, followed by the 31 percent that prefer access to a local branch.

Generally, online-only banks are going to be the best way to earn an interest rate of more than 2 percent APY on your savings account. Online banks don’t carry the same overhead costs compared with brick-and-mortar branches, so they can pass that savings to customers. 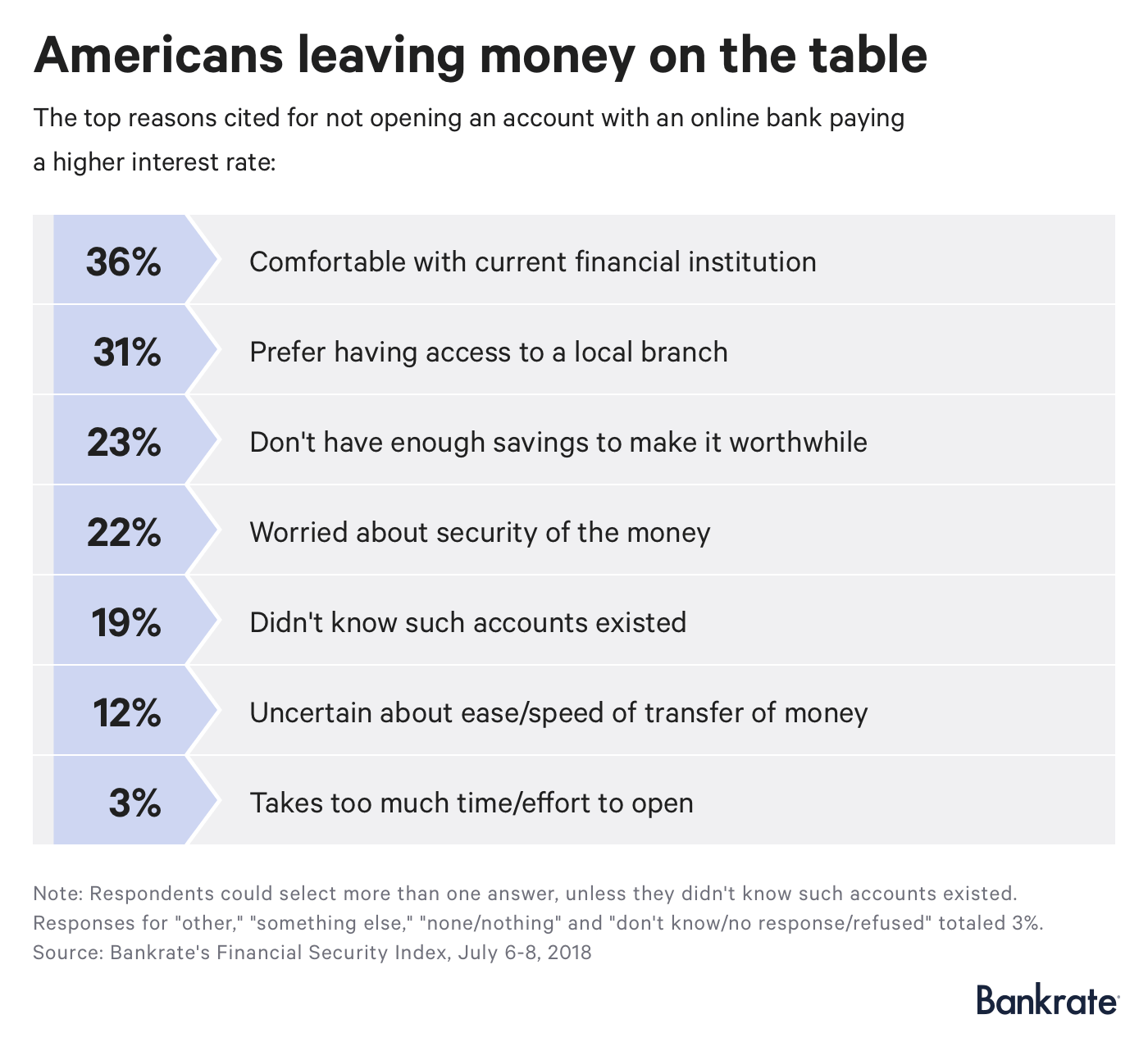 Anna Sergunina, CFP, ChFEBC, a financial planner at MainStreet Financial Planning, Inc., in Burlingame, California, says she has no problem if her clients maintain their relationship with their local bank or credit union. They can even leave a little savings at their brick-and-mortar bank if that makes them feel comfortable.

But the rest of the money that needs to work for her clients should go in an online-only bank paying a competitive interest rate. Sergunina says she’s had an online savings account for around a decade. But had she not been monitoring rates, she would have had no idea how much savings rates have recently increased. And she knows this is happening to a lot of her clients.

“It starts with awareness,” Sergunina says. “… And checking in frequently.”

You don’t need a large balance

Another 23 percent of respondents in Bankrate’s survey said they didn’t think they had enough savings to make switching accounts worthwhile. But that mindset is a mistake.

“They’re in the mistaken impression that in order to earn higher returns you’re (going to) have to have a large balance,” McBride says. “And that’s not the case. Many of the top yielding accounts on Bankrate.com have no minimum deposit or a very modest minimum deposit.”

“Do yourself a favor,” McBride says. “Open an online savings account that has a high yield, and move the money in there so that you can preserve the buying power of your money.”