As Americans continue to climb out of the worst economic downturn since the Great Depression, many experts are taking note of a widening gap between the “haves” and the “have-nots.”

Federal income data over the past 20 years show a growing divide in income among all age groups. Bankrate’s analysis of the data reveals that the 65-plus age group has the widest income gap. But the income gap is growing fastest among 35- to 44-year-olds.

The bigger the income gap in a group, the greater the disparity between rich and poor. The gap can grow if there’s an increase in population of high earners, for example, and it can grow if there’s a rise in the number of poor people. It can also be a combination of both.

The income gap and the wealth gap are two different measures of the divide between the rich and poor, and both have an impact on the growing chasm. Wealth is often the result of stock market and home equity gains, in addition to income. Wealthier investors who were able to sock more into the stock market have grown much richer since the recession, according to Sean Snaith, director of the Institute for Economic Competitiveness at the University of Central Florida. Gains in housing values also boost wealth and affect a larger share of the population than stock market gains, he adds, yet the housing market is recovering at a slower pace.

An anemic labor market stifles economic growth and has been a major contributor to both the income and wealth gaps, says Snaith. When people are unemployed or underemployed, they not only stop investing, they stop spending. Because consumer spending accounts for a big chunk of the economy, it has a potentially enormous ripple effect. “If you look at consumer spending, it’s been on a downward trend all year,” he says.

The prime earning years for most people — when they’re in their 30s and 40s — are also the most important when it comes to setting up a future position on the wealth spectrum. As the Bankrate income analysis shows, the fastest-growing gap is among those ages 35 to 44. So, while some are quickly advancing toward becoming rich, others are just as quickly falling behind. 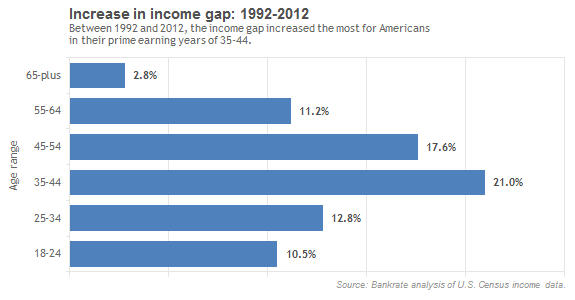 “This age group is in a kind of transition period, going from establishing themselves in their careers to that next level,” says Jason Flurry, president of Legacy Partners Financial Group. “They’ve lived a little, but they’re not really mature at this point and if they have kids, a lot of their money gets eaten up in just maintaining their lifestyle.” It’s a critical financial point, he adds. “If you handle that period well, it sets the course for the next decade; if you don’t, in many cases you can’t recover.”

Lauren Prince, Certified Financial Planner at Prince Financial Advisory in New York City, says there’s another factor working against this age group. Often, they’ve achieved middle management positions in their chosen careers, yet that sector was hit hard in the recession. “People reach middle management in their 30s and 40s, but technology is replacing them to the point where companies are making do with fewer people.”

People in this particular age group have taken hits in both income and wealth, says Snaith. If they purchased a home just prior to the recession, they probably lost more home equity during the housing crash than an older homeowner who purchased 30 or 40 years ago. “They’re more likely to be recent homeowners and more likely to be underwater on their mortgage,” he says.

As far as income goes, workers in their 30s and early 40s who have achieved a midpoint in their careers might have been pushed down a rung or two on the income ladder, Snaith says. Or, they might have been forced to take jobs they wouldn’t otherwise take. “Many of the new job opportunities are focused on the service industries and are typically not high-paying,” he adds.

“The labor market improves each month, but the pace is still underperforming, and for those in the phase of life where expenses are high, it could be tough to climb back up the ladder,” says Snaith.

The good news is that there is still time to recover financially before retirement. Snaith believes this generation is going through a stage of “mini-austerity” since being financially whacked by the recession. They’re generally more careful about how much they spend and are less likely to max out their credit cards, he says.

Some move up, some fall behind

A recent study by Pew Charitable Trusts found that economic mobility heavily depends on whether or not people grew up poor. Even though 40 percent of Americans believe in the economic value of hard work, 43 percent of those raised in the bottom quintile of the income ladder are stuck there a generation later and 70 percent never even make it to the middle rung, according to the study. A paltry 4 percent succeed in a “rags to riches” progression, attaining the top income levels.

The Pew study collected data from 1968 to 2009, following households over time. Researchers compared adults in their prime working years with their parents when they were at the same point in their lives, according to Diana Elliott, Pew’s research officer on economic mobility.

“What we found is that while 43 percent stay stuck at the bottom, some move up. This study explores what differentiates upward economic mobility,” she says. “College education, race and dual-income households were among the most important factors.”

The Pew study corroborates findings by other researchers. A 2011 Georgetown University study found that a bachelor’s degree can yield earnings of nearly $2.3 million over a lifetime, compared with $1.3 million for a high school diploma. 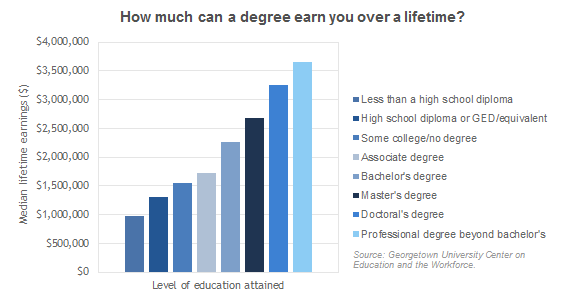 The chart shows that higher education is a big factor in future earning power. A college education yields 74 percent more in earnings over a lifetime than a high school diploma.

Of course, the potential earnings of a college grad are also closely tied to the chosen field of study. Flurry says that when it comes to career choices, graduates need to go where the money is if the goal is to build wealth. “You hear about starving artists a lot more than you hear about starving corporate executives,” he says.

But mastering financial literacy can be an even bigger contributor to attaining wealth, regardless of chosen career or income level, according to Flurry and Prince.

“Certainly there are people who have lots of degrees and are horrible money managers and then there are others with a high school education who become multimillionaires,” says Flurry. The key to financial success, he adds, is an understanding of how money flows, through interest rates, stocks and bonds and debt, for example. Once you understand that, you can figure out how to make your income work for you and avoid going backward by sinking into debt.

Prince cites a case study to illustrate why it’s more important to use your income wisely than it is to earn a high salary. “I have clients in their mid-70s, a couple who came from Italy to this country. They had two children. The father was a union carpenter and the mother delayed working while the children were young, then worked packing boxes for a pharmaceutical company. They have a couple of million dollars saved up and own a home where they are getting rent from the upstairs while they live downstairs,” she says. “They put their children through college, they have no debt and the house is paid for.”

Is a higher tax rate the answer?

Raising taxes on the rich and offering programs to the poor to achieve balance is a solution that’s often bandied about in the media. The original goal of the U.S. tax system was wealth equality, according to Matthew Gardner, executive director at the Institute on Taxation and Economic Policy. “Congress understood that huge concentrations of wealth have a corrosive power in our country.” But for a variety of reasons inequality has always existed and will continue to do so — it’s just that there’s no universal agreement on what level of inequality is acceptable, he says.

As billionaire Warren Buffett said when he pointed out his effective tax rate is lower than his secretary’s, the current tax code is not set up to even out wealth. At the lower end of the wealth scale, Gardner says, about half of our tax revenue comes from state and local taxes, and these impact low-income families to a greater extent, further taxing them into poverty.

In a less direct way, the tax system is also contributing to a vanishing middle class, says Gardner. “The reason we have had a middle class is that our tax system provides services such as roads, education services and medical care, to allow people to move up the income ladder. When those services are underfunded, it kicks out that platform from under the middle class.”

Although it would seem an easy solution to narrow the wealth and income gaps by restoring taxes to levels of the post-World War II period, when the top marginal tax rate was 70 percent-plus and as high as 94 percent, both Gardner and William McBride, chief economist at the Tax Foundation, say we live in a different economy now.

“When the income tax was first introduced in this country, not many people were paying it,” says Gardner. Today, with a top marginal rate of 39.6 percent, an increasing share of the population is paying that rate, making it more of a mass tax.

“When you tax high incomes, that will flatten the gap because you’re taking money from the rich,” says McBride. “Even if you burn the money, it still accomplishes the same thing. But by doing that, you’re reducing economic growth and investment. Several studies support that.”

Gardner says that ultimately, the tax system can’t be the driver for wealth equality. “It can’t prevent people from getting rich or prevent poverty or create a middle class or manufacturing sector. It can only help. I think a sensible goal of the tax system is, ‘First, do no harm.'”