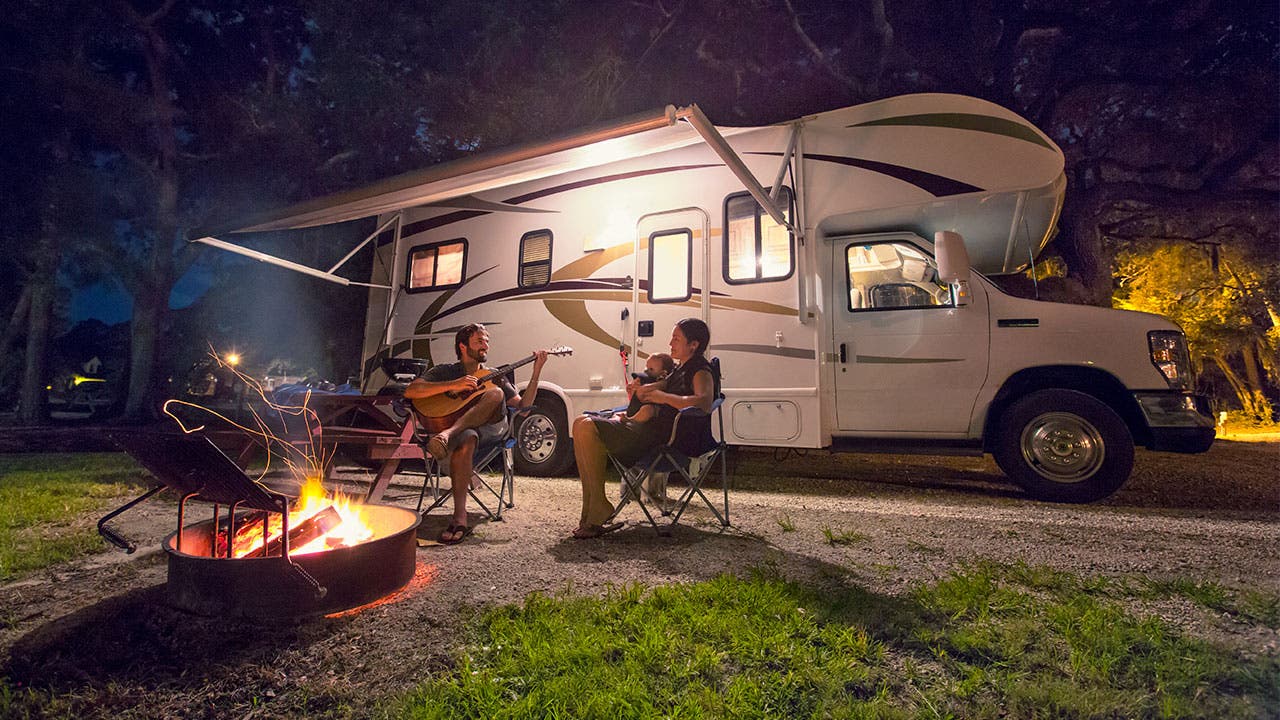 He and his wife, Brooke, liked to travel and didn’t want to leave their two cats and a dog behind. Brooke is a veterinarian. They were looking forward to cross-country drives to stay with family for weeks at a time, or just picking up and heading out into the country for a long weekend.

Four years ago, the then-San Antonio couple decided to plop down $20,000 in cash for their RV. The sum pretty much ate up their entire $25,000 emergency fund, but with no debt beyond their mortgage, Dooley, now 35, felt comfortable they could replenish it soon.

Ten days later, though, Brooke, 31 at the time, was diagnosed with breast cancer. After half a year of treatment, including chemotherapy and a double mastectomy, Brooke’s cancer was contained and removed. The couple had been able to replenish their savings in less than a year, even after paying $10,000 for an IVF-type procedure that wasn’t covered by insurance, to ensure their ability to one day have children.

“We learned the unexpected can happen, and an RV purchase is far from an emergency,” says Brian, who works in medical marketing.

Millions of Americans understand that lesson.

For the third consecutive year, according to a Bankrate survey, adults most regret not saving for retirement early enough – 18 percent of respondents – and not saving for emergency expenses (14 percent).

Debt was a secondary concern, with 1 in 10 respondents lamenting too much credit card debt and another 8 percent citing high student loans. Seven percent wish they saved more for their child’s college education, while 2 percent cite buying more house than they can afford.

Nearly a quarter said they regretted something else, and 15 percent had no financial regrets whatsoever. 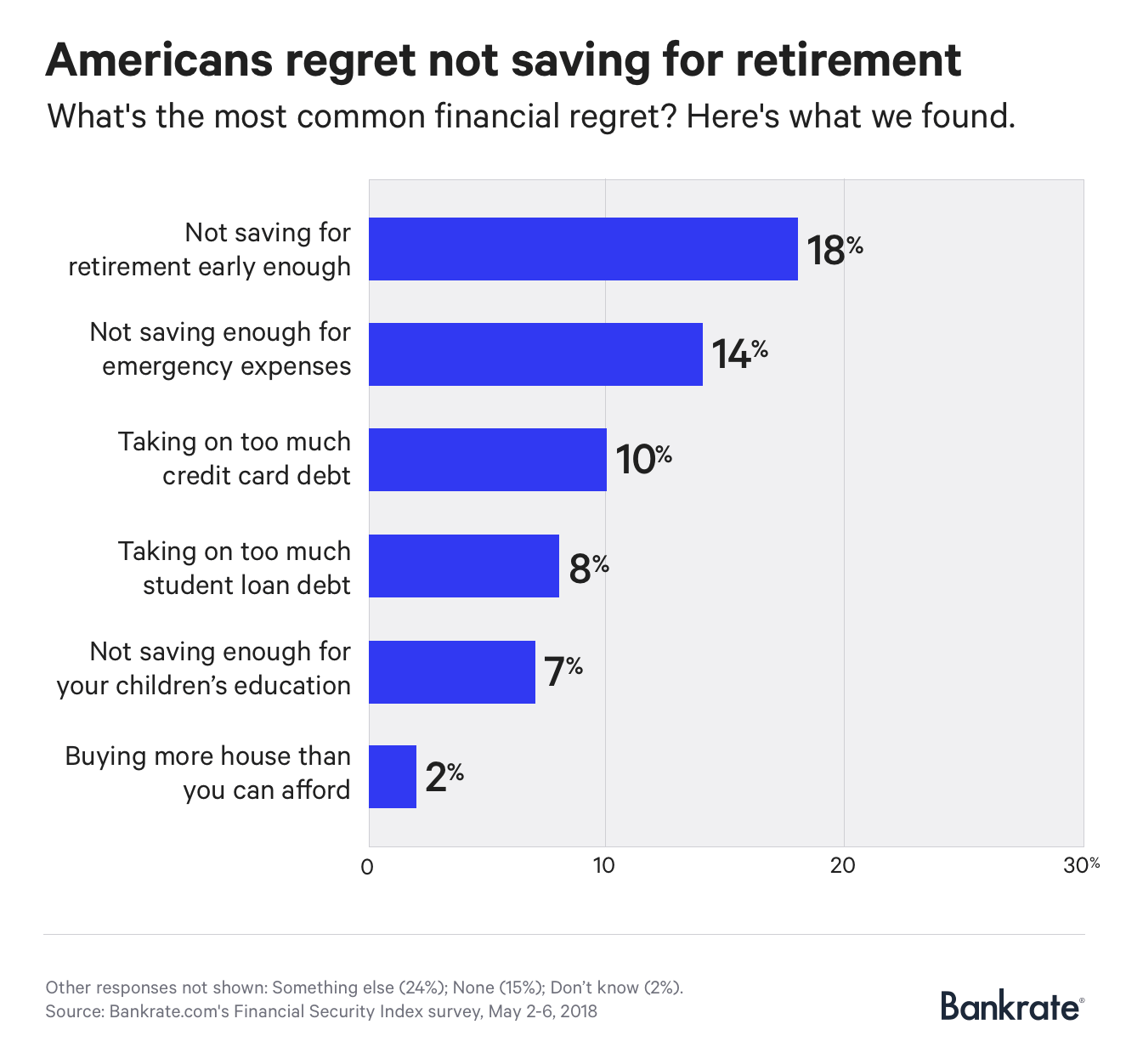 While mild wage gains and rising housing costs have burdened Americans across the country, there exists no perfect moment to get serious about saving.

“Time is your greatest ally when saving for the future,” says Greg McBride, CFA, Bankrate chief financial analyst. “To workers of all ages, there is no better time than the present to increase your 401(k) contribution or fund an IRA.”

There are two savings crises among American households: short-term and long-term.

In the here and now, most adults do not have enough stowed away in a savings account to adequately protect them from going into debt, should disaster (lost job, health scare) occur.

Financial planners recommend an emergency fund comprising six months’ worth of essential expenses in a savings account. That’s about $23,000 for the average household living in a major metropolitan area, according to a recent Bankrate report.

How much does the average American have? Less than $4,000, according to Federal Reserve data, which is why 39 percent of adults wouldn’t pay from an unexpected $1,000 expense out of savings.

And then there’s retirement.

Half of working-age adults, according to Boston College’s Center for Retirement Research, may not be able to maintain their standard of living once they stop working.

Americans, as the latest Bankrate survey finds, simply are nervous about their lack of retirement savings. Just half of middle-income Americans own a retirement account, according to the Fed, with a median holding of only $25,000.

The figures are even more scary if you look at households helmed by someone between the ages of 55 to 64, or the decade before retirement. Only 60 percent of those Americans, who are about to be out of the workforce, are saving for retirement, with a median amount of $120,000. Financial planners estimate you need about 11 times your final paycheck to retire securely. 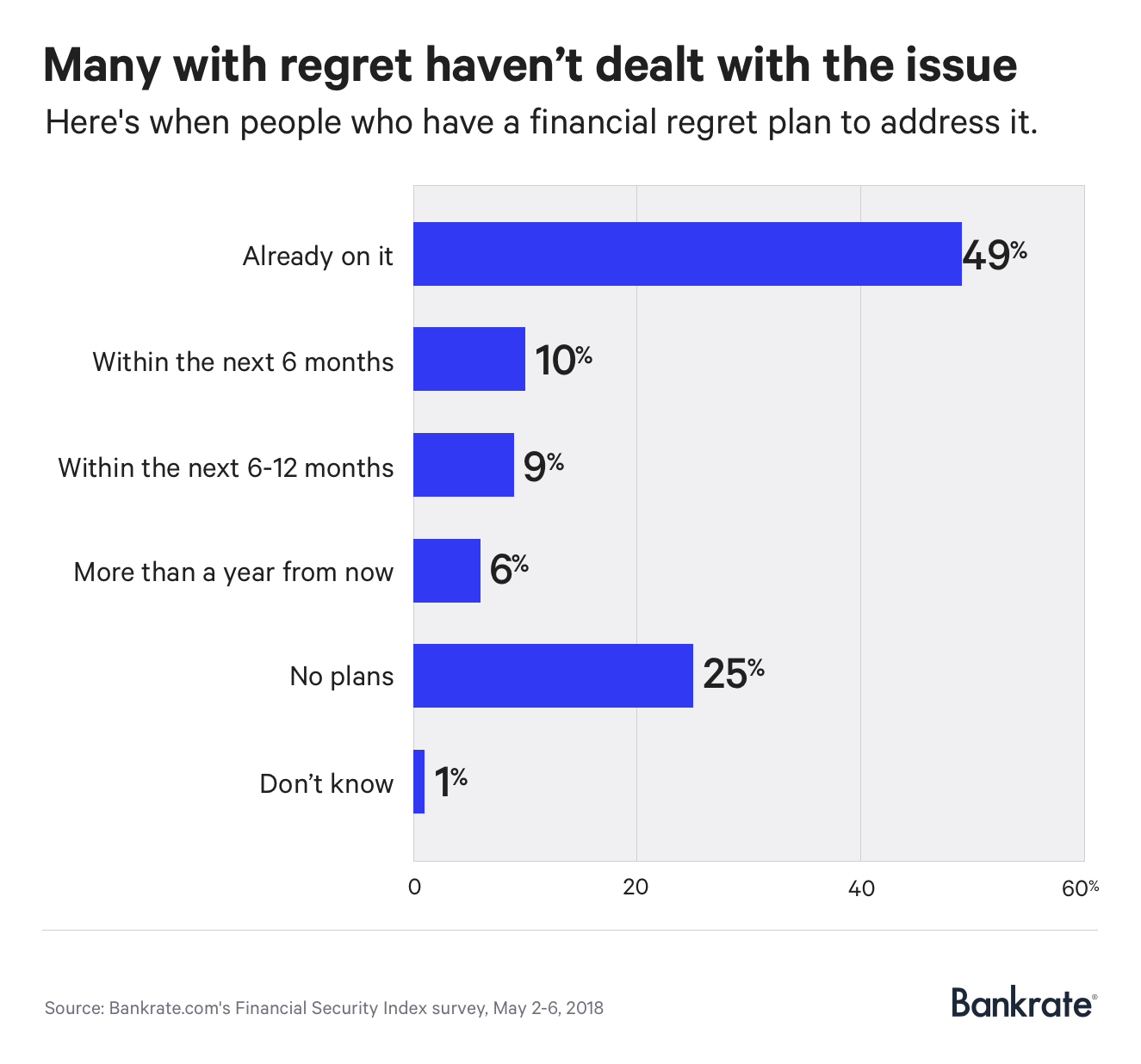 How you can avoid financial regret

“I’m not surprised the biggest regrets in your survey are about not saving enough,” says Chantel Bonneau, a San Diego-based Northwestern Mutual wealth management adviser and CFP professional. “So many are woefully behind schedule on savings.”

Incentives: This issue revolves around the lack of a clear goal. What’s the point if you don’t have a story in your mind to account for why you’re saving? These clients may intellectually understand why saving is better for their finances than spending, but without a clear number in mind, they lose enthusiasm and focus.

“It’s just hard to get excited without a goal,” Bonneau says.

So, create a goal. Make it real. If you want to buy a house, label your savings account “down payment” and start building toward a specific number that will help you afford a home in your price range.

Anchoring: The other issue, especially for retirement, is not adjusting the amount of your savings when your income rises. Some of Bonneau’s clients contributed, say, $50 a month to an IRA when they were 22, but hadn’t increased their contributions as their incomes rose.

“People are locked in on numbers,” Bonneau says. “For instance, I just believe my cable bill should be $80 a month. I’m comfortable with that. The same thing happens with savings.”

The trick is to break yourself of that anchor. Fifty bucks may have made sense on your first salary but is insufficient later in life. In effect, you are living beyond your means by decreasing your savings rate.

Instead of thinking in terms of dollar amounts, then, use percentages. Get used to saving 10 percent of your pay in an employer-sponsored 401(k) including any match, or in an IRA.

You’ll have less to regret later in life.

This study was conducted for Bankrate via landline and cellphone by SSRS on its Omnibus survey platform. Interviews were conducted from May 2-6, 2018, among a sample of 1,004 respondents. The margin of error for total respondents is +/- 3.70% at the 95% confidence level. SSRS Omnibus is a national, weekly, dual-frame bilingual telephone survey. All SSRS Omnibus data are weighted to represent the target population.