Many people struggle to save money, but others find that saving allows them to finance their biggest goals without the added interest expense of debt. Here, three big savers tell how they each managed to sock away money for a goal: $15,000 for a new car, $85,000 for a condominium and $5,000 for five rooms of new carpeting.

A hobby pays off

Elle Green, 35, a recipe-testing and development consultant in Memphis, Tenn., makes a mean sweet potato cake, and that’s “mean” in a good way. In fact, Green’s cakes are so popular that her hobby of baking them for family and friends enabled her to save $15,000, which she used to buy a new car.

The basic Toyota Yaris wasn’t exactly the fully loaded Toyota 4Runner that Green originally coveted. But the Yaris, which she’s nicknamed “Blue” on account of its color, was an all-cash purchase, financed entirely by the sale of cakes.

“I remember driving Blue off the lot and my friends laughing and saying, ‘It’s manual! I didn’t know this still existed,'” Green says. “But I told them, ‘It’s paid for.'”

The car replaced a 12-year-old vehicle that Green says was well-maintained but had become so unreliable that it stalled repeatedly, at least once on the highway. Desperate for a solution that wouldn’t involve debt, Green, aka “chef Elle,” turned to her sister Denise for advice.

Soon, a little menu card was made up with a note informing friends and family that Green’s cakes would come at a price of $45 to $55.

“I was surprised!” she says. “I didn’t think they would buy them because they were used to getting them free. My sister’s advice really worked.”

Saving up $15,000 took nine months, Green says. And she adds that it wasn’t easy, rising at 4 a.m. to check orders, holding down a full-time job and baking cakes until midnight. But the business prospered, and Green netted other unexpected benefits as well.

“Saving up the money really helped me put things in perspective of what’s really worth it,” she says.

Save toward a goal

Beth Sikorski, 50, and husband, Randy, 55, spent almost a decade vacationing in Florida and dreaming of buying a second home there before they finally started saving in earnest. That was seven years ago. They had neither a timeline nor dollar figure in mind, but they resolved to put 10 percent of all their earnings toward reaching their goal.

The Sikorskis are self-employed. She owns a marketing company. He runs an auto body shop near their primary home in Waterville, Ohio.

Initially, they planned to save only the down payment for a property, but due to the housing crash, they were able to pay $79,900 in cash for a bank-owned condo in Bonita Springs, Fla. They still had $5,000 left over to budget for fresh paint and new furniture, Beth Sikorski says. The $5,000 was a lump sum they put into the pot of money toward the paint and furniture. It wasn’t specifically allocated to one or the other.

SmartyPig.com was a big help, Beth Sikorski says. She used the financial website to automate and track the couple’s savings plan, which was interrupted only for a few unexpected medical bills and school travel expenses for their son, now a college freshman.

Beth Sikorski says to save money, you must think in the long term and discipline yourself to continue despite any setbacks.

Ashley Walkup, 27, and husband Michael, 37, of Winston-Salem, N.C., have saved money to purchase a grill, lawn furniture, appliances, a bed and, most recently, five rooms of carpeting with padding and installation included. 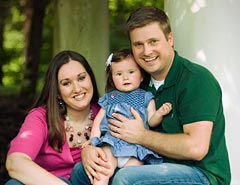 The carpet for the couple’s two-story home was an overdue improvement, she says.

“We’ve lived here 10 years, and it was really bad, but we never had the money for it,” she says. “It was not a priority. Once we had other things in place financially, that was one of the things we wanted to splurge on.”

“My husband wanted to start putting more into retirement,” Ashley Walkup says. “We decided to save for both at the same time.”

The couple’s strategy is based on a monthly budget that portions out however much they earned in the prior month to meet their current needs and allots whatever’s left to savings.

Walkup is a stay-at-home mom with a young daughter. But good deals are so much a part of her world view that she also runs an income-producing blog that offers coupons, household tips and Bible-study resources. Her husband is a biostatistician who works on medical studies for various companies.

“My goal is always to save more than (the price of) what I want and try to find a good deal on it,” Ashley Walkup says.