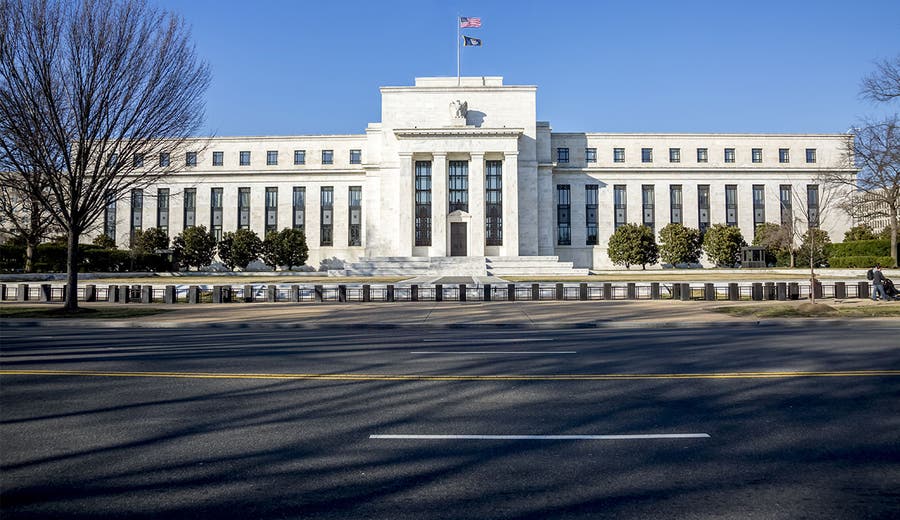 Jerome Powell was widely considered an uncontroversial pick to helm the Federal Reserve in the mold of his predecessor Janet Yellen. For House Financial Services Committee Chairman Jeb Hensarling, that’s a problem.

Hensarling, R-Texas, used Powell’s first congressional testimony last February to reiterate a point that has stuck in Republican craws for much of the past decade: the Fed’s colossal balance sheet and how the central bank sets interest rates. Powell was nominated by President Donald Trump and approved by most Senate Republicans.

“(It) is critical that the Fed stays in their lane,” Hensarling said in his opening remarks. “Interest on reserves — especially excess reserves — is not only fueling a much more improvisational monetary policy, but it has fueled a distortionary balance sheet that has clearly allowed the Fed into credit allocation policy where it does not have business.”

The Fed’s $4.4 trillion balance sheet has riled Republicans ever since former Chair Ben Bernanke started buying up trillions of dollars of bonds to lower interest rates and stimulate the economy in the aftermath of the financial crisis.

A group of right-leaning economists and political analysts came out against so-called quantitative easing in 2010, while the GOP consistently voiced their opposition. Twenty-six Republicans voted against Janet Yellen, a Bernanke ally, to become Fed chair. Many Republicans opposed Powell when he was first nominated to the Fed Board of Governors in 2011.

Thanks to an improving economy, the Fed is now unraveling its unprecedented monetary policy in an effort to get back to normal. That means reducing its tremendous balance sheet and raising short-term rates.

But as Hensarling mentioned in his statement, the manner in which the Fed increases rates — through interest on excess reserves (IOER) — represents an intensifying battlefront.

Life used to be much simpler.

The Fed held about $900 billion worth of assets in summer 2008, right before the financial world exploded. Since December 2013, the central bank has owned at least $4 trillion in assets, peaking at $4.5 trillion.

Why does this matter for interest rates?

The Fed has two jobs: maximize employment and keep prices stable. The main tool the Fed has to achieve these ends is setting the federal funds rate, which is what banks charge each other to make short-term, uncollateralized loans.

When the economy is roaring, the Fed raises interest rates to increase the cost of borrowing in order to temper inflation. When everything goes south (like in the financial crisis), the Fed lowers rates so banks lend more, which will hopefully stimulate economic growth.

Before the crisis, the Fed would raise or lower interest rates by buying or selling Treasury securities to banks through open markets operations. If the Fed wanted to sell Treasuries, banks would take money out of the reserve account they held at the Fed and buy them. Fewer reserves means that banks would have to pay more to borrow, and hence a higher federal funds rate. The opposite happens when the Fed wants to lower rates.

But given that its balance sheet is so high, the Fed decided it couldn’t move rates around in the same way without spooking markets.

They needed another plan.

Banks are required by law to hold money at the Fed — these are called reserve requirements. But banks also hold more money than they are required to, and that pot of cash is called excess reserves.

Being required to hold money at the Fed is like a tax on the bank, since it cannot lend that money to earn a return. A 2006 law allowed the Fed to pay interest on the reserves banks had to hold to counteract that implicit tax.

More controversially, the Fed started paying interest on excess reserves that banks held. (That practice is known as the IOER). The Fed finances interest payments through the net income it earns on its vast portfolio.

The Fed believed it’s the best way to control short-term interest rates given how large their balance sheet is.

Anyone who follows the Fed knows that in recent years the central bank sets a target range for the funds rate. Right now, for instance, the rate is between 1.50 percent and 1.75 percent.

The top end of that range corresponds to the IOER. The Fed controls the low end through something called the Overnight Reverse Repurchase Agreement Facility (ON RRP), which works like the IOER, but for non-banking entities, such as a Fannie Mae.

So the Fed sets the floor (ON RRP) and the ceiling (IOER) for the funds rate through these two complex monetary tools.

Later in his statement, Hensarling issued a warning to Powell.

“When Congress granted the Fed the power to pay interest on reserves, it was never contemplated or articulated that IOER might be used to supplant (the Federal Open Market Committee),” he said. “If the Fed continues to do so, I fear its independence could be eroded.”

Powell, during his hearing, said the Fed’s current approach of using the IOER “seems to be working very well.” Indeed, the funds rate has stayed within the Fed’s target since the central bank began hiking rates at the end of 2015.

But the approach is politically unpopular. Two years ago, former Chair Yellen received a bit of stick from Hensarling, who called it a “subsidy,” and liberal Maxine Waters, D-Calif., who claimed the Fed is “paying money to banks” through the IOER.

Fed officials disagree with that characterization.

While the attacks were consistent, they come from two different places. There’s a small segment of liberal Democrats, including Bernie Sanders, who believe the Fed has disproportionately helped large banks, which is why Sanders is the only Senate Democrat to support a divisive bill that would give Congress more control over the Fed.

Conservatives have a separate bone to pick. They never supported the Fed’s unconventional monetary policy. And while the Fed has committed to winding down its balance sheet, it’s unlikely that it will end where it was before the crisis. (Bernanke thinks it’ll end up around $2.5 trillion.)

The IOER, then, is not only a tool to change interest rates, but codifies a policy that many Republicans believed to be a one-time response to a devastating crisis, albeit a response they always opposed.

What’s it going to mean for you?

The Fed has never tried to cast off such a huge balance, which means there’s no playbook. But the last six months have shown that borrowers and investors may be in for a bumpy ride.

When the Fed announced last fall that it was going to lower its balance sheet in October, shedding $10 billion a month in securities before eventually reaching five times that level, everything seemed placid.

Trump boasted about stocks hitting all-time highs, and the yield on 10-year Treasuries was at a tiny 2.1 percent, which meant that mortgage rates remained historically low.

Since then, however, life has changed.

The GOP-passed tax bill shot a dose of adrenaline in an already humming economy, pushing up inflation expectations, reducing the demand for bonds and increasing mortgage rates. Stocks turned volatile in 2018, with huge swings in either direction, leaving major indexes unchanged despite the wild rides. And the Fed has continued to jack up interest rates.

The Fed, even using IOER and slowly letting bonds roll of its balance sheet, has turned hawkish. It’s hard to pin everything on that decision, but, by definition, a tighter monetary policy slows down economic growth. That’s the point, and everyone is adjusting to the new reality.

But life would surely be more unpredictable if the Fed aggressively shorn its balance sheet like Hensarling wants, rather than use the new tools at its disposal.

Powell and company want us to end up at a more normal monetary environment without even realizing we’ve arrived.