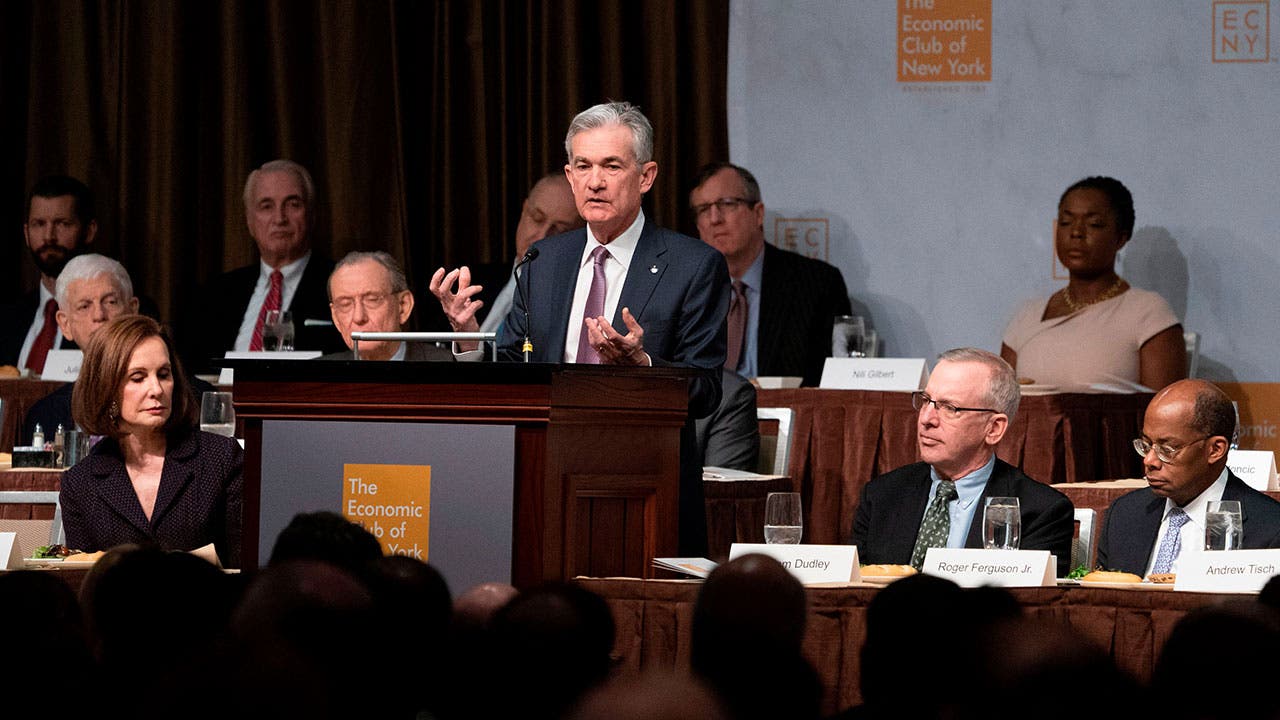 The Federal Reserve may not be able to say with certainty when it will stop gradually raising interest rates, but one thing it’s clear on is its job description.

As the agency in charge of setting the country’s monetary policy, the Fed has two main jobs: stabilizing prices and achieving maximum sustainable employment.

But when it comes to addressing financial stability concerns, its hands are somewhat tied.

“I would certainly agree that monetary policy is not a great tool to address that third concern and that it’s far preferable to use supervision and regulatory tools to address financial stability to the extent that we can,” said Fed Chair Jerome Powell following a speech before the Economic Club of New York Wednesday.

Hours before Powell spoke, the Fed released its first ever Financial Stability Report, outlining its new framework for responding to issues related to financial stability.

Not the Fed’s main job

The Fed already has two goals and adding a third objective isn’t ideal, Powell explained when asked whether monetary policy should take financial stability into account in addition to unemployment and inflation. Rather, that’s something other groups can handle more effectively.

The Fed’s role in addressing financial stability concerns has transformed in recent history. In the early 1970s, it started providing emergency loans to non-member banks. With the passage of the Dodd-Frank Act, the Fed nearly became solely responsible for ensuring that the country’s financial system was stable, but language that would’ve made that the case was ultimately deleted. The law instead led to the creation of the Financial Stability Oversight Council, which includes members from multiple regulators and the Fed.

The Fed can’t create new laws or policies that fix problems related to financial stability head-on, but it can keep an eye out for red flags and potential risks that elected officials can consider. Reports like the one published Wednesday are part of the Fed’s plan to be more transparent as it monitors the strength and stability of the country’s financial system.

“Thus, the purpose of the report is to provide a common platform and set of readings from which policymakers and other interested parties can form their own views,” Powell said during his speech.

What’s in the report

The Fed’s analysis is more concerning for businesses and investors than it is for everyday consumers.

Some “highly leveraged” firms have been taking on more corporate debt. That could become a problem for investors, Powell noted, if economic conditions took a turn for the worse, and it’s something the Fed intends to watch closely.

But banks are “resilient” and well-prepared to weather any potential storms. Capital levels are strong and institutions have plenty of liquid assets. Household debt has increased moderately and nearly in line with increases in household income.

“My own assessment is that, while risks are above normal in some areas and below normal in others, overall financial stability vulnerabilities are at a moderate level,” Powell said.

Overall, the economy is healthy. The unemployment rate is at a historic low and inflation is expected to remain around the Fed’s 2 percent target.

But there’s no telling what could eventually serve as a shock to the financial system. Powell notes that the Fed doesn’t see “dangerous excesses in the stock market,” but global trade concerns are on its radar as possible problems that could lead to financial distress.

Though Powell hinted that the pace of interest rate hikes could slow next year, consumers might want remain on their guard, taking steps to pay down debt and ensure their own households are financially stable.

“In that spirit, everyone who is a participant in the economy would be wise to consider the risks, including those associated with the financial system,” Hamrick says. “For many, the call to action might be to make personal financial decisions accordingly, such as deciding to save more, etc. All of this falls under the wisdom of being engaged and informed citizens, including so that we can make the best decisions possible with our finances.”