You can count on the Federal Reserve to keep raising interest rates this year, which will mean higher rates for borrowers, experts say in a new Bankrate survey.

“The Fed will continue to take baby steps in raising rates, but the frequency will increase” says Sean Snaith, director of the Institute for Economic Competitiveness at the University of Central Florida.

Borrowers beware: If you’ve got credit cards or a home equity line of credit (HELOC), you may want to start paying down some of that debt. When the Fed hikes rates again (and again), you’ll be the first to feel it.

Overall, the outlook is positive, according to top economists who participated in Bankrate’s second-quarter 2017 Economic Indicator survey. They expect employers to keep adding jobs at a healthy clip, and the unemployment rate to remain low. 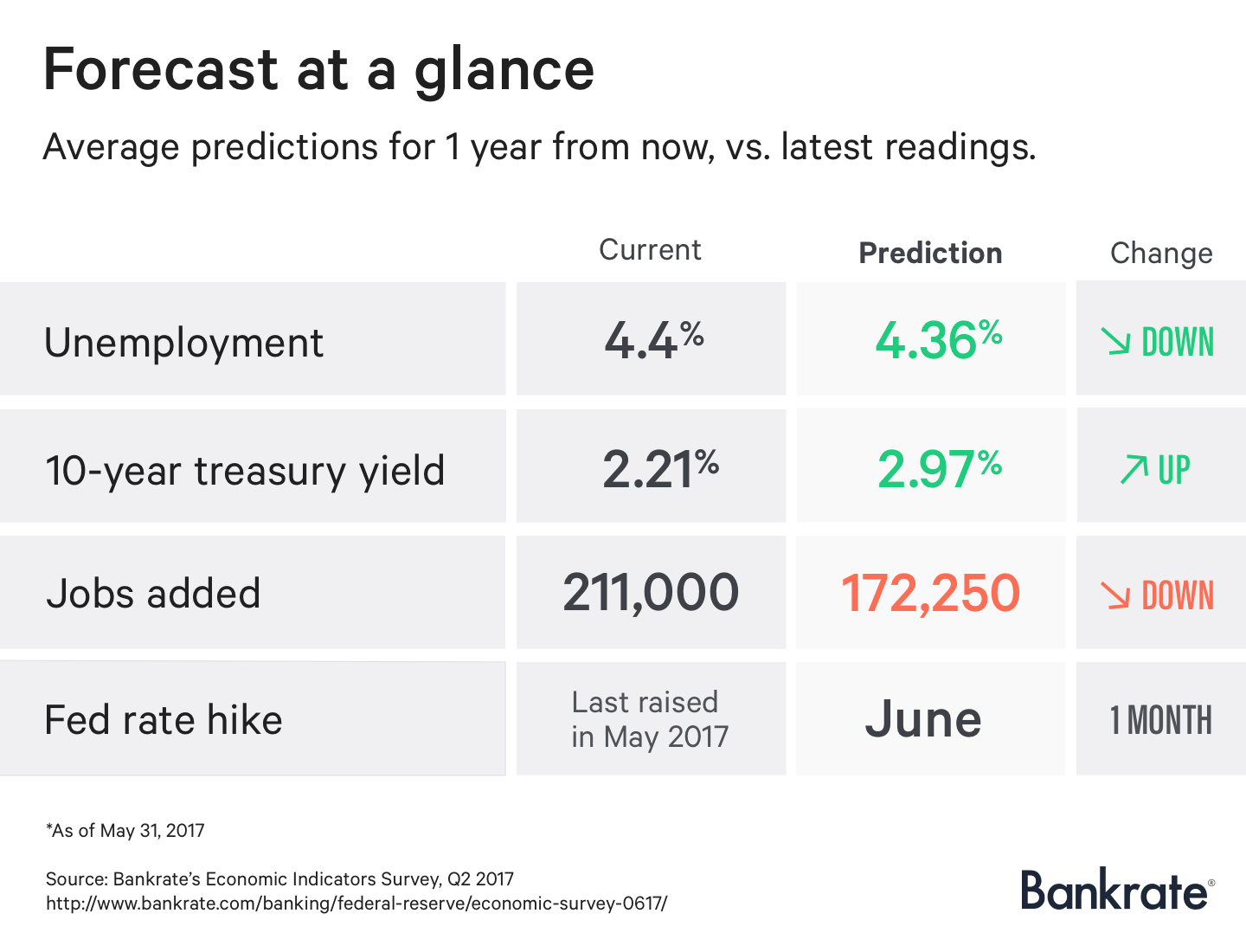 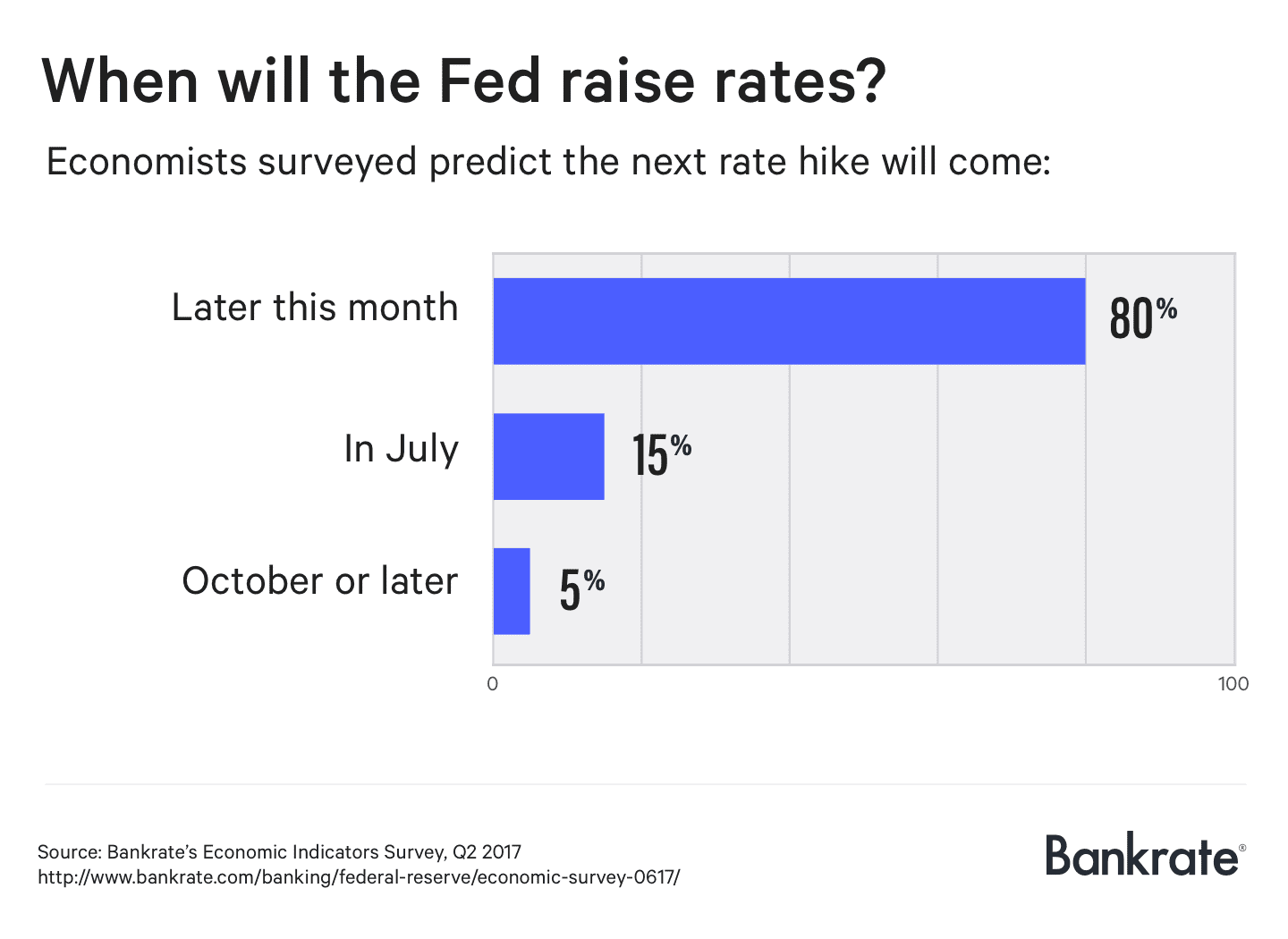 The Fed has raised rates three times since December 2015 but left its key interest rate unchanged in May. The next meeting is scheduled for June 13-14.

“The economy is showing reasonable strength, and with inflation near the Fed’s target, the Fed deems it necessary and prudent to continue its slow process of ratcheting rates upward,” says Bernard Markstein, president and chief economist with Markstein Advisors.

The yield on the 10-year Treasury note — a benchmark for mortgage rates — is around 2.2 percent. We asked survey respondents to estimate where the yield would stand 12 months from now. 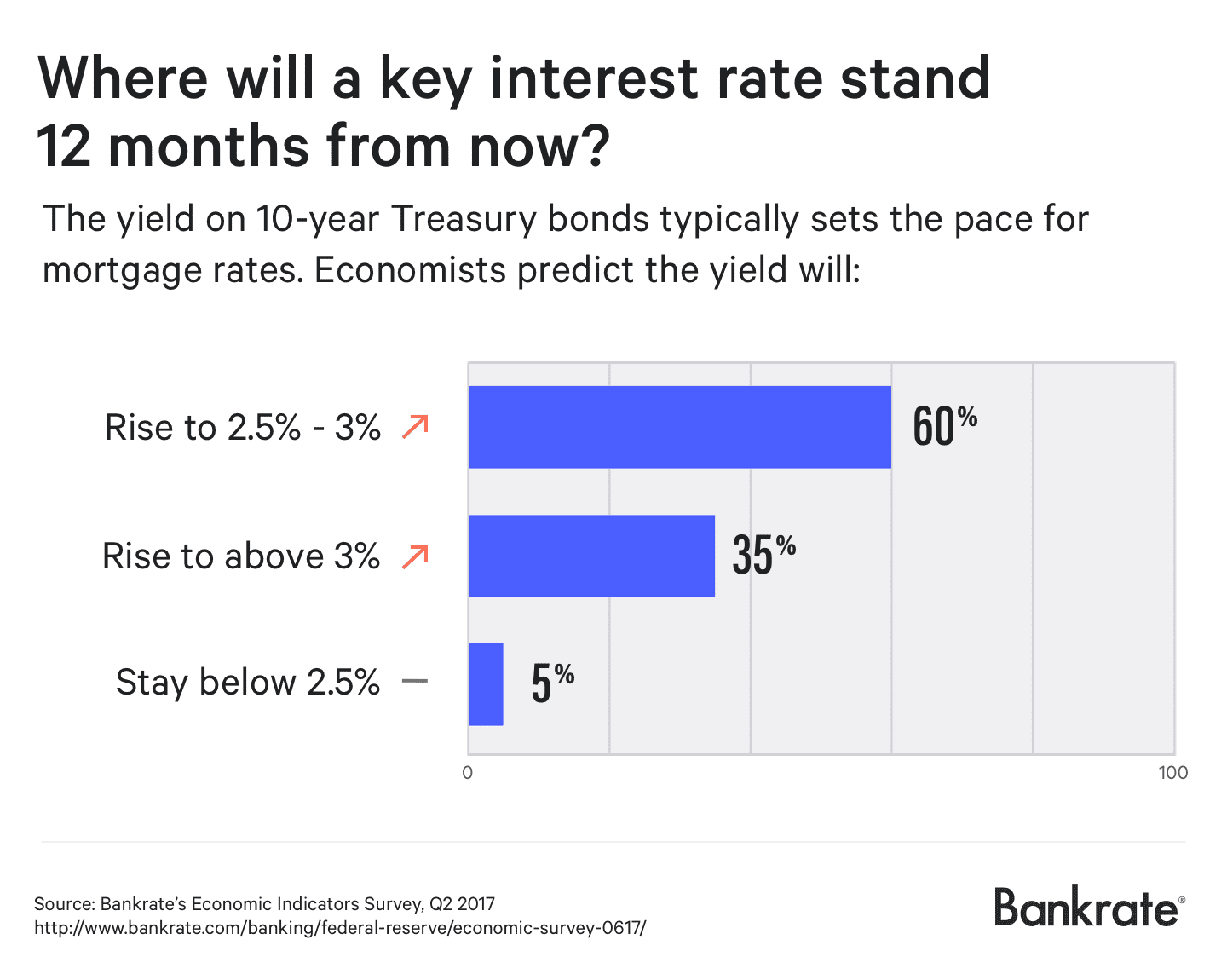 “Homeowners looking to refinance should be prepared to act quickly any time there is a pullback in mortgage rates,” he says.

Getting closer to full employment

Job growth should continue at a moderate pace over the next year but may slow slightly. Among survey respondents, the average forecast is for monthly job gains of 172,250 one year from now. In April, the economy added 211,000 jobs.

Amid gains in hiring, unemployment will likely continue to fall. On average, the economists expect the jobless rate to hit 4.36 percent 12 months from now. The April 2017 rate was 4.4 percent.

Low unemployment is one of the Fed’s major monetary goals — further proof that the central bank may soon lift rates.

“The tighter labor market will bring about higher wages, but will also bring about more action from the Fed,” McBride says.

Savers eager for higher rates shouldn’t take a wait-and-see approach. Start comparing top rates for short-term CDs, the best savings accounts, and money market rates. Your investment portfolio should have the right mix of stocks and bonds based on your risk tolerance.

Following the weakest first quarter for economic growth in three years, the economists are slightly less optimistic about further expansion in the economy. The average projection for annual growth rate in GDP is 2.41 percent, down from a 2.5 percent forecast in our first-quarter survey.

However, 95 percent of the forecasters say the economy isn’t likely to reach sustained annual growth of 3 percent or higher during President Trump’s current term. That’s the target he has outlined with his budget and tax plans.

“Even if all the administration’s proposals are implemented in their most pro-growth form, slow labor force and productivity growth act as speed limits and will prevent sustained growth of 3 percent or higher,” says Mike Fratantoni, chief economist at the Mortgage Bankers Association.

Not sure what the future may hold for your own finances? Find an expert who can help you make the right money decisions.