Small, membership-based credit unions lack the resources to build branches the way the big banks can.

To overcome their access limitations, more than 5,600 branch locations participate in the CO-OP Financial Services network, allowing members from participating branches to make deposits, withdrawals and other transactions often at no or minimal costs. The service comes in handy for people on vacation, students attending college, movers and other credit union users who find themselves away from their home financial institutions.

Together the participating credit unions make up the second-largest branch network behind Wells Fargo. The San Francisco-based financial giant reported 5,805 retail locations as of March 31, 2018.

The CO-OP network allows credit unions from Alaska to Florida to take on JPMorgan Chase, Bank of America and other major financial players while saving on the cost of building, maintaining and operating new branches, says Kathy Snider, Ph.D., senior vice president of debit, ATM and shared branch services at CO-OP Financial Services.

“I can’t see the banks partnering to say, “Hey, I’ll tell you what. You can use our branches, and I can use yours.’ So, shared branching is an extremely unique value proposition that gives credit unions scalability and access that individually they just can’t obtain,” Snider says.

The best places for shared branching

The rise of mobile and online banking has not stripped the need for physical locations. More than two-thirds of Americans (66.9 percent) said having access to a bank or credit union is a moderately or very important factor when deciding where to live, according to the 2017 Survey of Household Economics and Decisionmaking from the Federal Reserve Board.

For shared branching, Maine reigns supreme on the number of co-op branches that members can take advantage of. The Pine Tree State offers nearly 13 branches per 100,000 people, according to a Bankrate analysis of CO-OP Financial Services data. 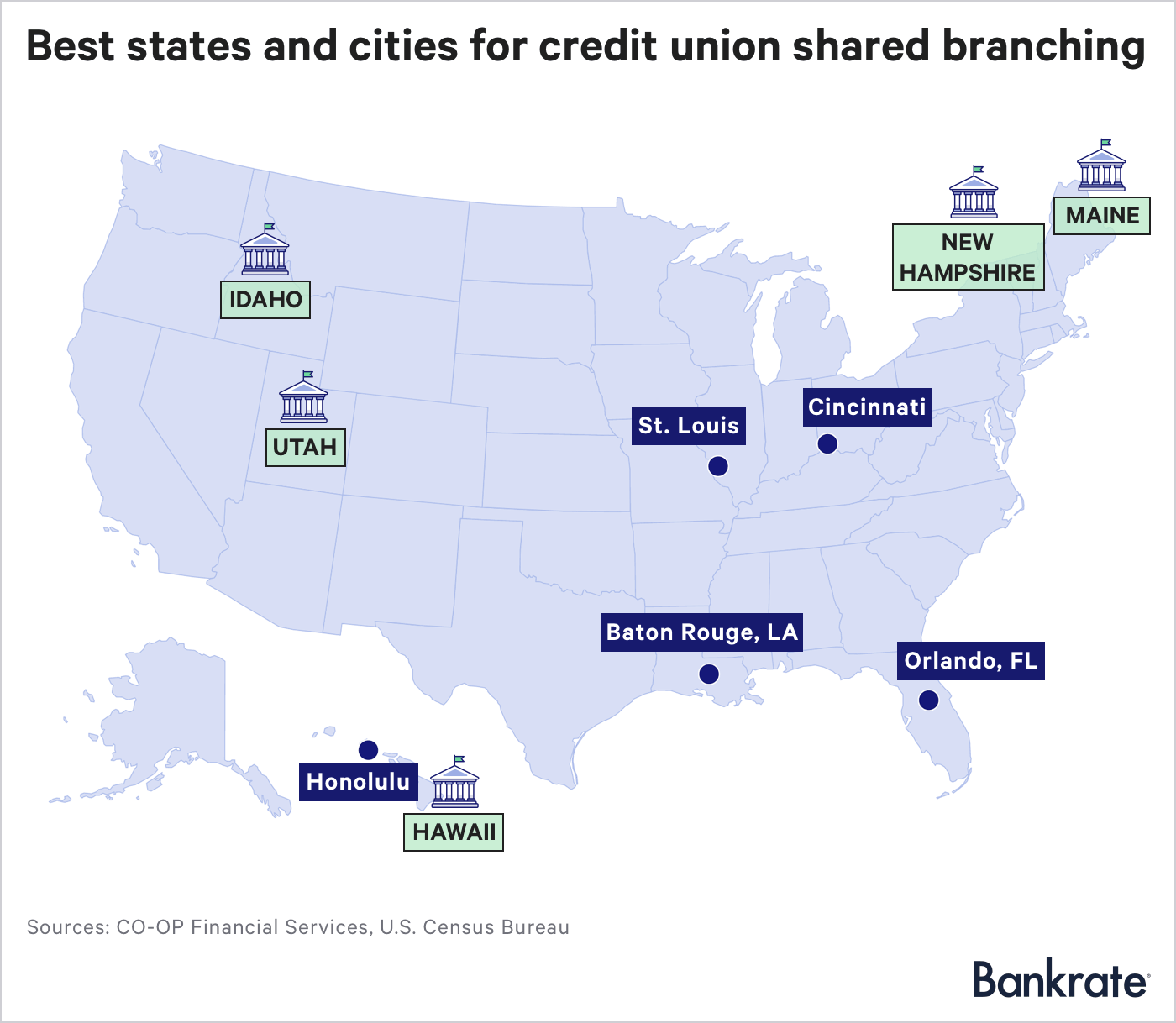 When looking at the 100 most populous cities, Baton Rouge, Louisiana, rises to the top with nearly 11 branches per 100,000 people. Vacation destinations Orlando, Florida, and Honolulu also rank high with 9.28 and 8.56 shared branches per capita, respectively.

CO-OP Financial Services says the number of credit unions in the network expanded by about 43 percent from February 2010 through June 2018.

“The network has been growing,” Snider says. “Credit unions get it. They see the value proposition because at the end of the day there’s all sort of technology, but branches still matter.”

The worst places for shared branching

People in Kentucky who want widespread access to their financial institutions might be better off going with a traditional bank. The Bluegrass State offers less than one credit union (0.43) per 100,000 people, according to the data from CO-OP Financial Services.

Maryland and New Jersey in the northeast also faired poorly with 0.56 and 0.63 shared branches per capita, respectively.

Three of the 100 largest cities — Raleigh, North Carolina; Laredo, Texas; and Santa Ana, California — lacked a shared branch credit union within their limits. Seven branches were listed with a New York City address, leaving just 0.08 branches per 100,000 people, according to the data.

Minneapolis and Los Angeles didn’t fare much better with 0.24 and 0.26 shared branches per capita.

But ultimately, physical locations will be just one factor to consider when deciding where to store and manage your money.

“Credit unions may not have the widespread branch locations, extensive product lineups or latest mobile technology of large commercial banks, but their competitive advantage is often lower fees and balance requirements than what is seen at many banks,” says Greg McBride, CFA, chief financial analyst for Bankrate.com.