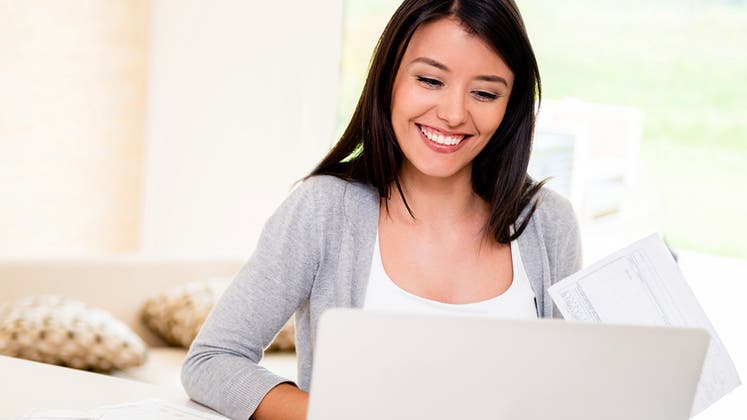 A checkless checking account may sound like an oxymoron, but it’s actually a growing trend at banks and credit unions.

The accounts are part of a burgeoning movement among financial institutions to tap into the surge in digital banking, as more and more consumers rely on online and mobile banking and debit cards for their banking needs.

In fact, a 2014 survey by Citibank found that more people use online and mobile banking than paper checks to pay their monthly bills.

Of the consumers surveyed, 38 percent said they turn to online and mobile banking for paying bills, compared with 32 percent who use paper checks. And more than half of respondents avoid writing checks whenever possible.

Having a checkless checking account, also known as e-checking, fits that trend. “It’s good for consumers who want to have a streamlined, mainly electronic relationship” with their financial institution, says Ben Rogers, research director at the Filene Research Institute, a think tank backed by the credit union industry.

While the details vary from bank to bank, the general principles behind checkless checking are the same. You do your banking online or via a mobile app, and when you need to access cash or make a purchase, you use your debit card.

These e-checking accounts have low or no monthly service fees and you can’t spend more than what’s in your account, so you won’t face overdraft fees.

On the flip side, you typically can’t write paper checks. That’s a problem if you often send checks for your nieces’ and nephews’ birthdays or use checks to pay the baby sitter.

Filene’s Rogers says consumers need to ask themselves if they can make all the payments they need online or by using their mobile phone. “If not, it’s probably not the right account,” he says.

The industry is rolling out these e-checking accounts slowly. “Banks are experimenting with whether a segment of the population is interested in this type of account,” says Nessa Feddis, senior vice president of consumer protection and payments with the American Bankers Association.

Citibank rolled out its Access Account in 2014. The bank made the move as it saw interest in checkless checking accounts growing. “The ongoing rise in digital banking is changing how people pay bills and use accounts,” says Robert Beck, Citi’s U.S. retail banking chief operating officer.

“Many consumers want a simple product with low fees and no overdraft fees at all,” Beck says.

Citi isn’t the only big bank in the checkless checking game. Bank of America and KeyBank have launched accounts in recent months. Plenty of smaller banks and credit unions also have these accounts.

Like any banking product, you need to read all the fine print that comes with these checking accounts because each financial institution has its own spin on checkless checking and the fees that come with it.

For example, with Citi’s Access Account, you can get the $10 monthly service fee waived by simply having your payroll, pension or government check directly deposited into your account or by making one electronic bill payment per month.

A Hassle-Free Account at KeyBank, based in Cleveland, carries no monthly service fee.

If you need to send money to an individual, you can use a Web service such as Popmoney to send cash via your computer or mobile phone for 95 cents per transaction.

Still, some banks do charge a mandatory fee on such accounts.

Cutting down on costs

One big draw for some consumers is the fact that these accounts typically charge no overdraft fees.

With checkless checking accounts, the transaction typically won’t go through if you don’t have enough money in your account.

“Consumers want control. They only want to spend the money that they have in their account and not go into debt,” says Susan Weinstock, Pew’s director of consumer banking.

While these types of accounts can be a win for consumers who want to avoid or control checking fees and eliminate paper from their lives, they also can be a boon for financial institutions as they look for ways to cut costs.

A 2010 study by research firm Celent found it cost banks $250 to $300 per year to provide a checking account for a consumer. Not having checks and other paperwork to process cuts down those costs, Feddis says.

Consumers with financial issues aren’t the only ones who could be a good fit for checkless checking accounts.

“It points to where we’re going,” Rogers says. “It’s their way to interact with the world. For consumers like these, the e-checking account is a great way to go.”