If you’ve been wasting your hard-earned dollars on bank fees, it’s time for an intervention.

The average ATM surcharge hit a record high for the 14th year in a row, according to Bankrate’s 2018 checking account and ATM fee study. And while the average overdraft fee dipped slightly, it’s the second-highest that it’s ever been in history.

If you’ve opted into an overdraft protection program, you can expect to get hit with a fee when there’s not enough money to cover a debit card transaction or ATM withdrawal.

The average overdraft fee fell 0.5 percent in the past year, dropping to $33.23. But the most common overdraft fee is $35. And in the survey, the number of fee increases outnumbered decreases.

While banks were technically earning a bit less from overdraft fees in 2017 than they were the previous year, they remain a key source of revenue for many banks. And despite political pressure, overdrafts fees are unlikely to fall significantly in the coming years.

“Maybe you get a break on the first overdraft because it’s not until the second overdraft that you pay the higher $35 fee,” McBride says. “If there’s any easing up on overdraft fees, it’s going to look more like that rather than just an across-the-board decline in fees.” 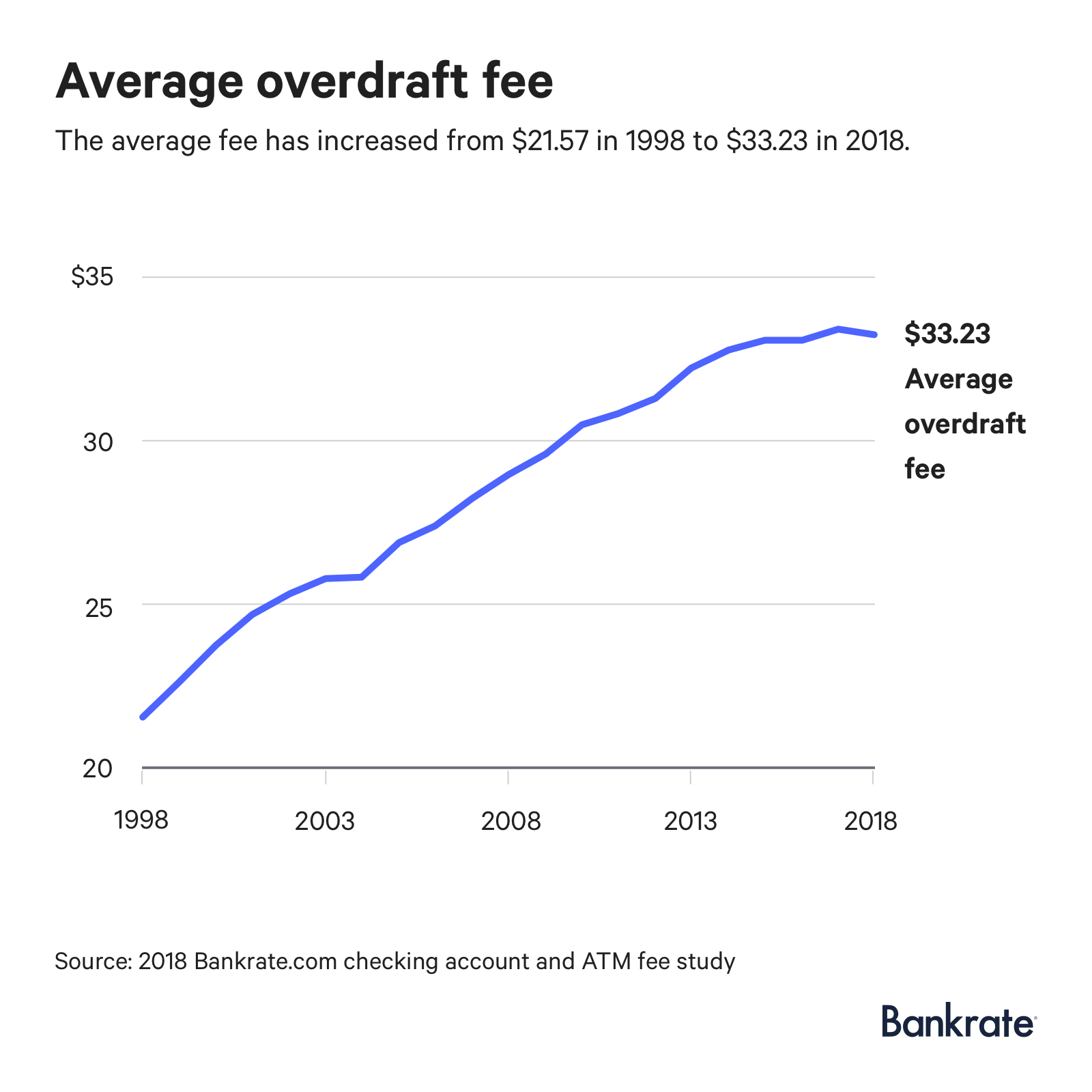 Avoiding overdraft fees is possible if you opt out of overdraft protection. You can sign up for account alerts and keep tabs on your account balances. You can link your checking and savings accounts so that there’s money to grab if you overdraw your account.

Another option is to opt for an account that doesn’t charge overdraft fees at all, like the ones that meet standards set by a national initiative called Bank On. Twenty accounts across the country meet the criteria and charge monthly fees that are low or can be waived, says David Rothstein, a principal for the Cities for Financial Empowerment Fund. 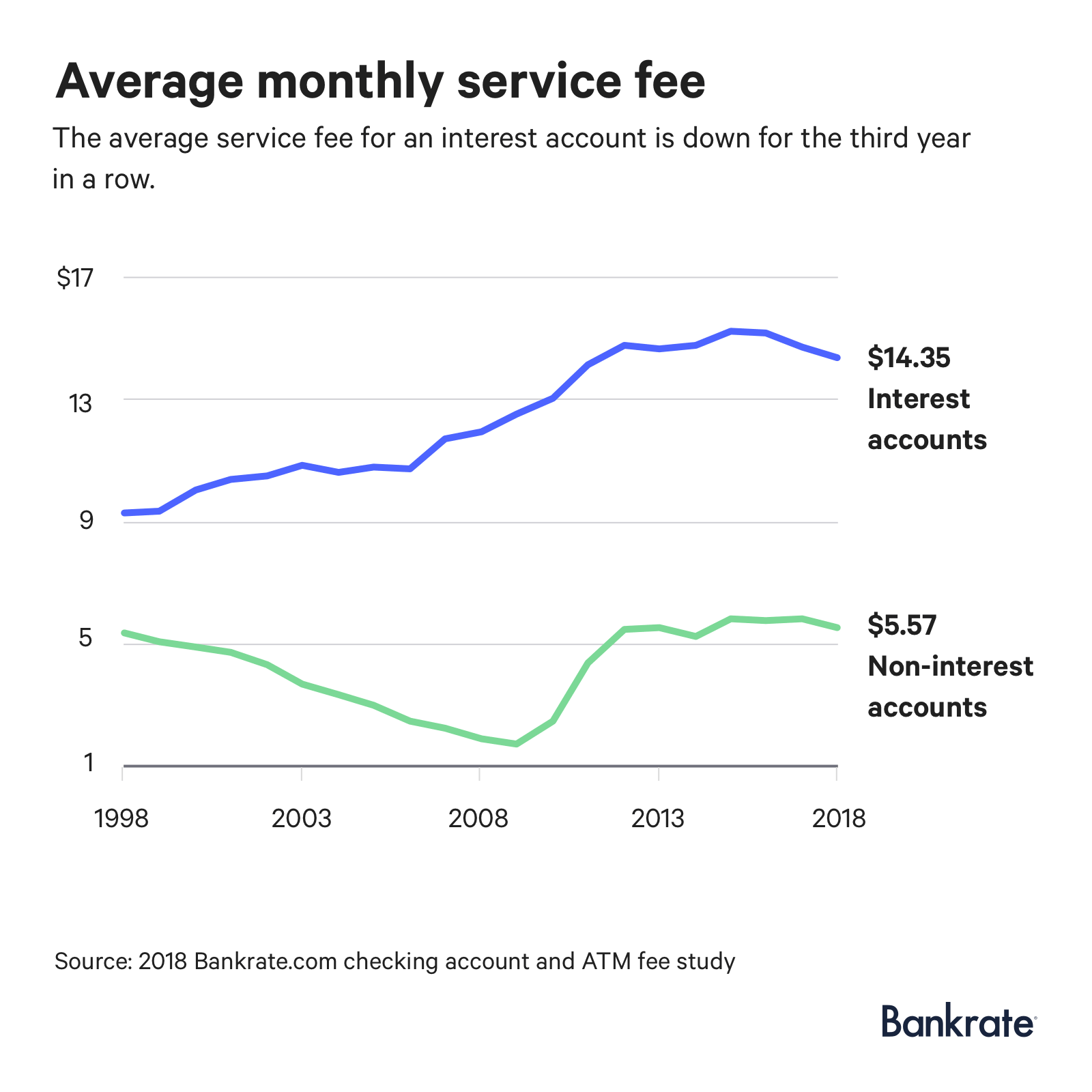 “You could have a free checking account and run up hundreds of dollars of fees every year because you overdraw because you use certain types of services,” says Ron Shevlin, director of research at Cornerstone Advisors. “There are actually credit unions more so than banks that actually have an inactive fee if you’re not using the account.”

If you’re trying to get around paying bank fees, you’ll have to read the fine print to find out what the bank is charging. If you opt for a fee-free online-only or mobile bank, make sure you’re meeting the requirements for the accounts at your traditional bank.

Among the non-interest checking accounts included in the survey, the average minimum balance to avoid fees is $631.31. As it’s been for the past decade, the most common balance requirement to avoid fees is $1,500. 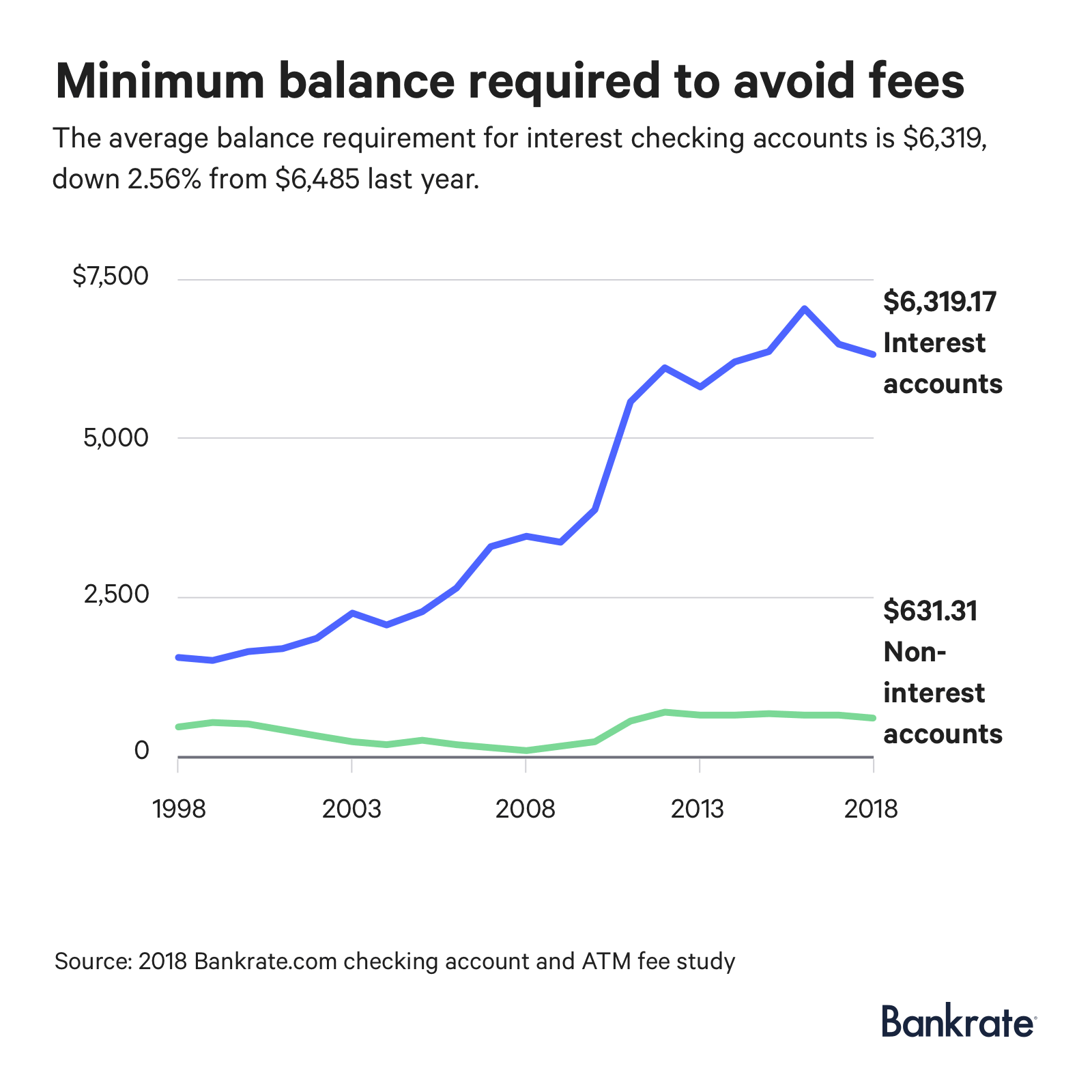 While direct deposit remains a common way to avoid fees, avoiding bank charges in general really comes down to changing your behavior, Shevlin says. “How you manage your money is going to impact the fees you pay regardless of whether or not they have a fee-based or free account.”

For the interest checking accounts included in the survey, the average balance requirement declined for the second year in a row. At $6,319, it’s down 2.6 percent from last year.

“There’s still an opportunity cost of lost interest on the money that you’re tying up at the bank to avoid a service fee,” McBride says. “You could earn a higher return on that money elsewhere, such as in an online savings account.”

Interest-bearing checking accounts pay an average of 0.07 percent APY. That’s a smidge higher than these accounts have paid for the past couple of years.

But as we’ve seen for the past six years, the most common yield remains 0.01 percent. And even though the Federal Reserve is raising interest rates, don’t expect banks to start paying out more interest to checking account holders. 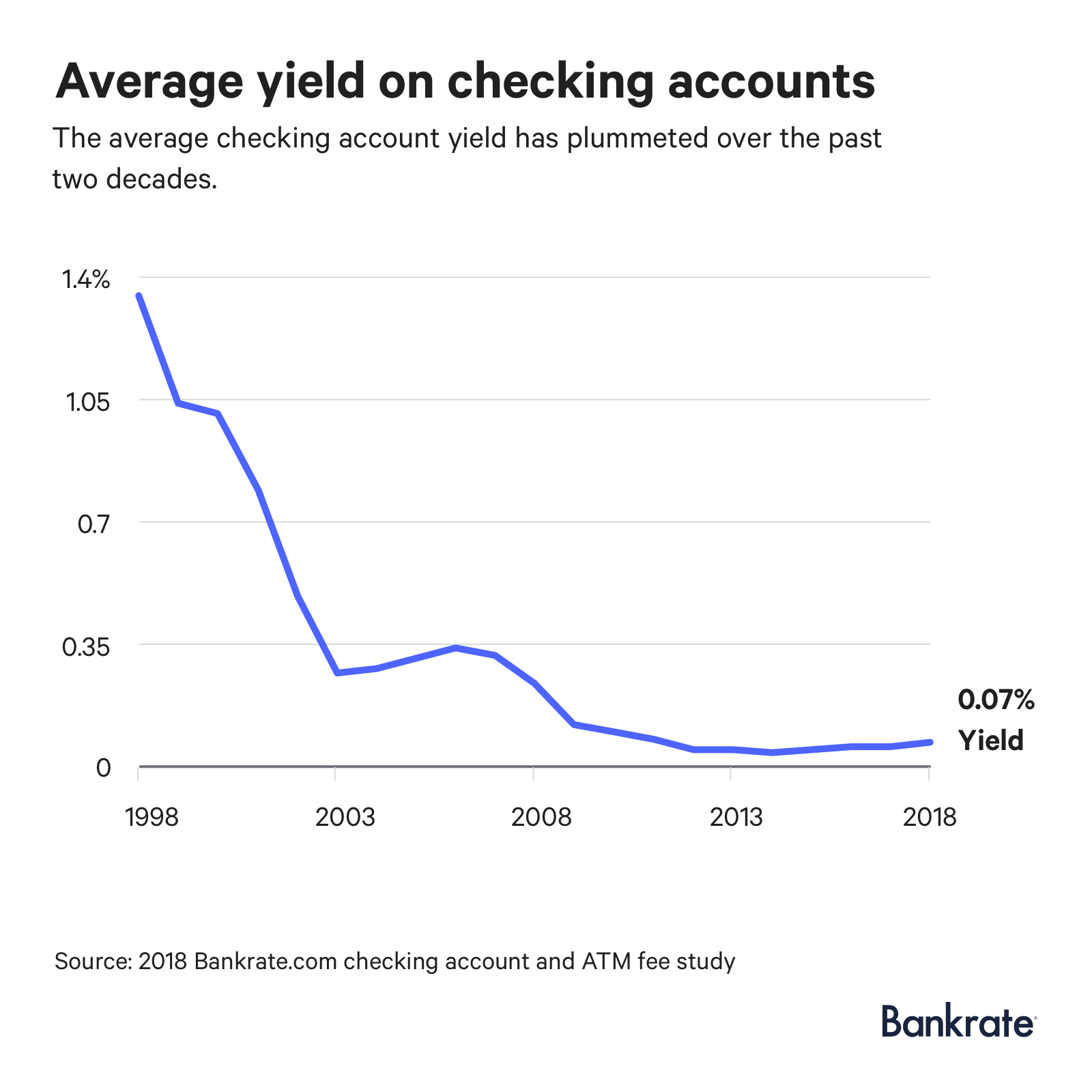 “Banks aren’t going to pay up on a transaction account,” McBride says. “So to get a better yield, you’ve got to look to an online savings account or be willing to commit your money for a period of time in a CD.”

By shopping around, it’s possible to find reward checking accounts paying as much as 4 percent APY. But those types of accounts are typically offered by credit unions and community banks. And to earn a high rate, get ready to put in some work. You may need to use your debit card a certain number of times per month and meet additional requirements.

The average ATM surcharge has increased 19 times in the past 20 years. At $3.02, it’s currently the highest that it’s ever been. McBride expects that fee to continue climbing. “Nobody’s worried about alienating a non-customer,” he says. 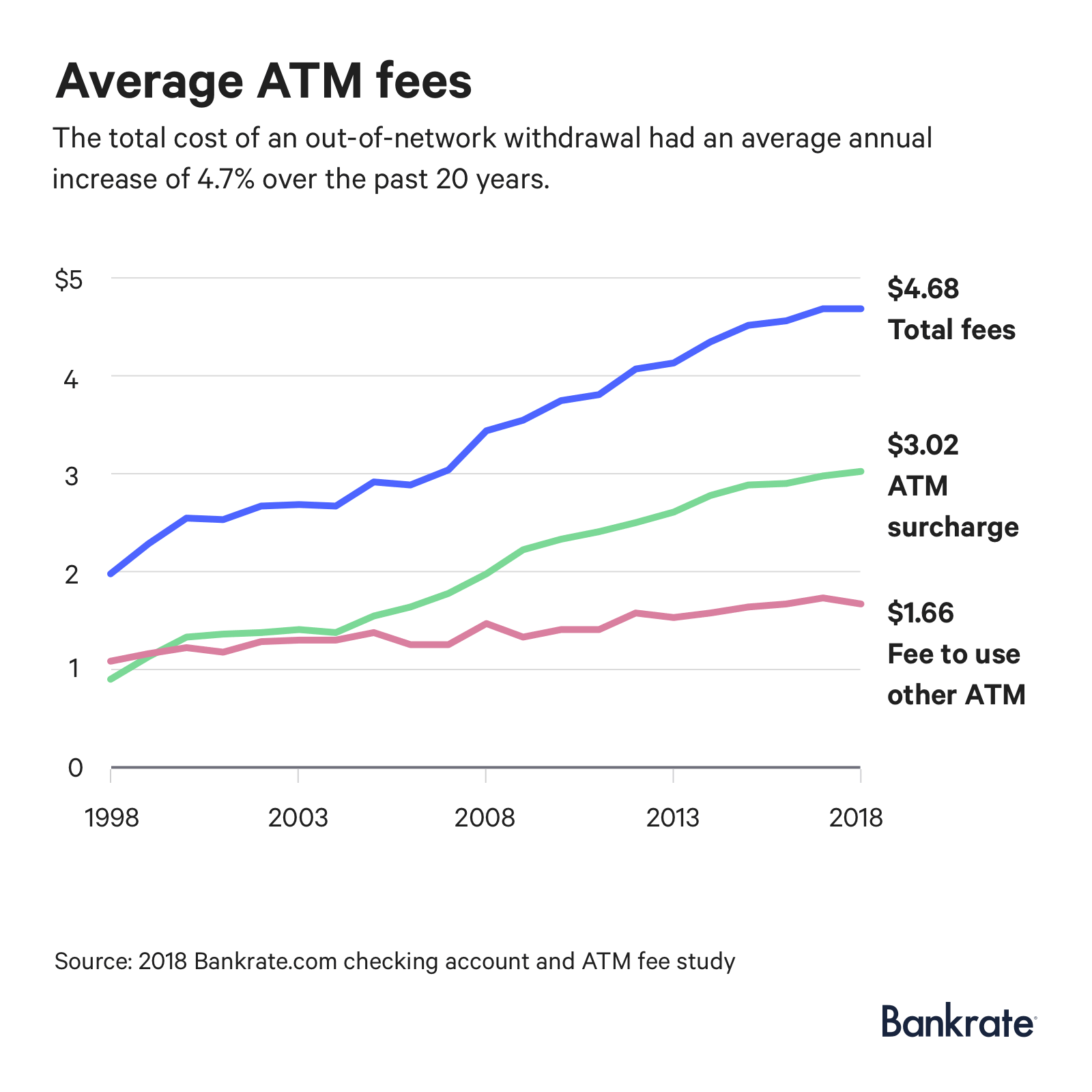 Consolidation and other changes in the industry have made ATMs vital for consumers.

“As branches close, they’re forced to use ATMs if they need to get cash or they could go to the supermarkets and get cash when they’re paying from a debit card,” says Karen Augustine, a senior manager at the Mercator Advisory Group. “But they can’t get as much cash. It’s not as flexible.”

If you’re in the market for a new checking account, look for a bank that’ll reimburse you for out-of-network ATM charges. Thirty-two percent of the banks in Bankrate’s survey offer customers free out-of-network withdrawals.

How much you’ll save from avoiding out-of-network ATM fees may vary depending on where you live. Out-of-network ATM users in Detroit pay $5.28, on average. Their counterparts in St. Louis spend an average of $4.25 on the same fee.

ATM owners can charge more based on market conditions, says Sarah Grotta, a director at Mercator Advisory Group. So you could pay more in an area that’s popular among tourists or in a big city.