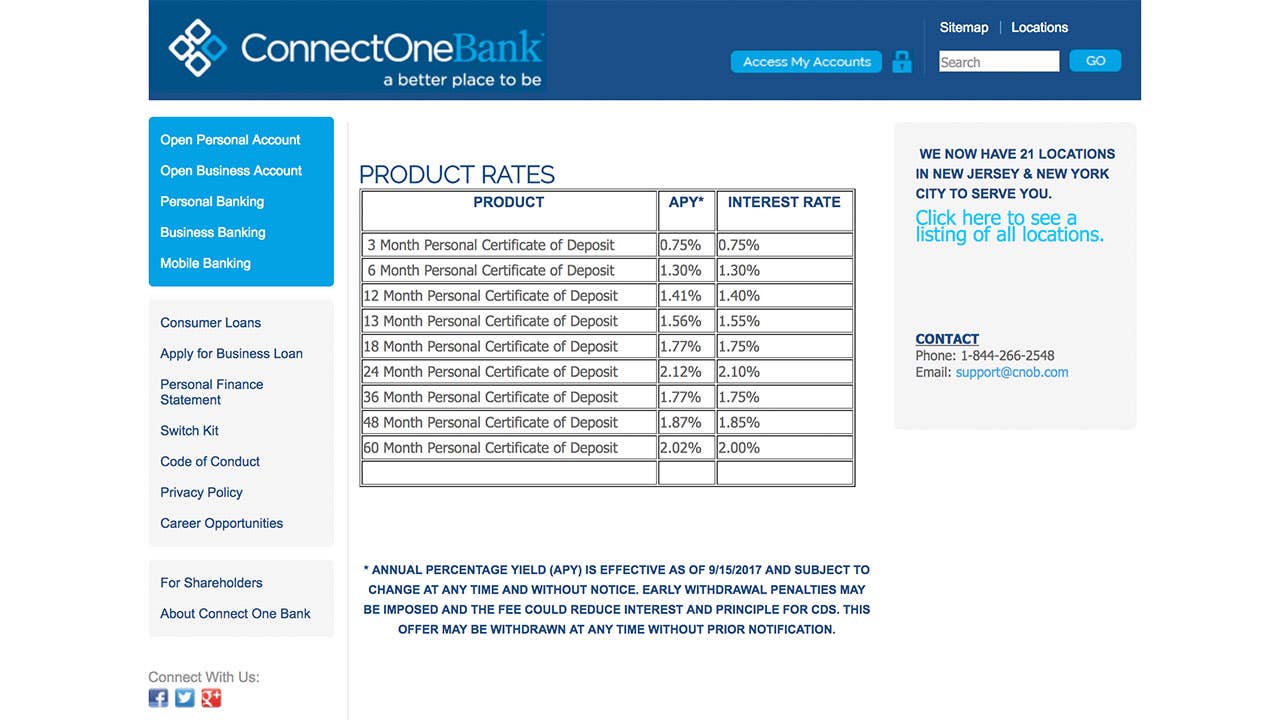 Taking your investing game to the next level is easy when you have access to the country’s best CD rates.

At ConnectOne Bank, savers can purchase a 2-year CD paying 2.12 percent APY. That’s the highest nationally available rate for a CD of its kind.

It’s nearly three-tenths of a percentage point higher than the 24-month CD rates offered by banks like VirtualBank, First Internet Bank of Indiana and Popular Direct. See how it compares to other high-yield CDs.

Very little money is needed to qualify for this CD deal. If you have at least $500 to invest, there’s nothing stopping you from getting in on the market’s hottest mid-term CD offer.

Who should (and shouldn’t) buy this CD

ConnectOne Bank’s 2-year CD isn’t for everyone. If you can’t commit to locking up your money for a full 24 months, you’ll face some consequences.

Here’s why: Its early withdrawal penalty is pretty harsh. For ConnectOne Bank CDs with terms of at least 24 months, the cost of an early exit is 360 days of interest. Ouch. According to the terms and conditions, the penalty will be taken from your principal if you haven’t earned enough interest.

On the other hand, if you’re serious about saving more money and you don’t mind giving up some cash for a couple of years, this CD could be worth buying. Calculate how much interest you could earn by the end of your term.

Though the Federal Reserve is planning another rate hike this year, it could be awhile before you see a higher 2-year CD rate.

How to buy ConnectOne Bank CDs

To open a ConnectOne Bank CD, visit the bank’s website. An applicant must:

You’ll need your account number and routing number when you’re ready to make your first deposit. An ACH transfer is the only way to fund this account.

At the end of your term, you’ll receive a check with your principal and any interest you’ve earned. If you forget to collect your funds, the CD will automatically renew within 10 calendar days.

ConnectOne Bank is headquartered in Englewood Cliffs, New Jersey. Founded in 2005, it originally served local residents. Recently, it opened a New York branch and made its CDs available to consumers nationwide.

Deposits are insured through the Federal Deposit Insurance Corp. The bank earned four out of five stars on Bankrate’s latest Safe & Sound Ratings, which measures the financial health of banks and credit unions throughout the United States.