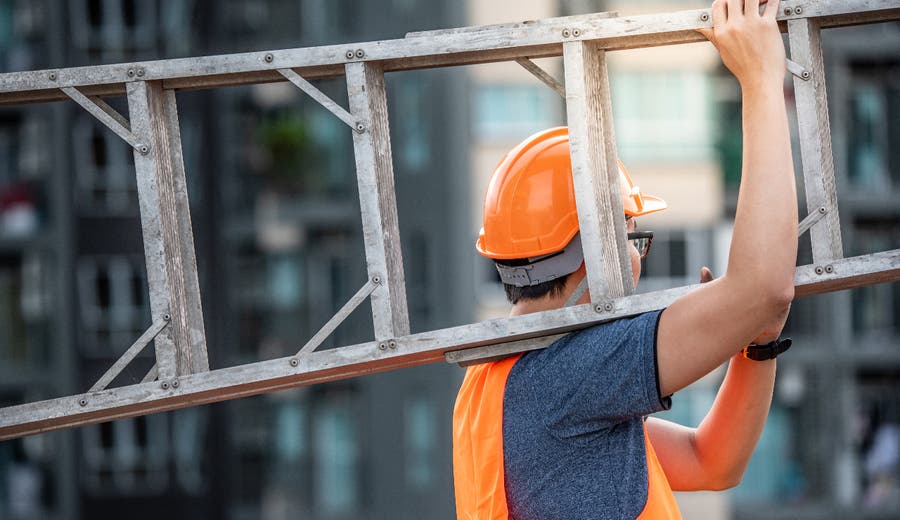 A CD, or certificate of deposit, is often thought of as a low-risk investment, but you have to lock away your money for a period of time. You can buy short-term CDs that mature in six months or one year, but you’ll likely miss out on the best interest rates available. The highest rates are generally paid out on longer-term CDs, such as three-year or five-year CDs.

What if you could enjoy the higher annual percentage yield (APY) of a long-term CD without parting with all of your funds for years at a time? That’s where a CD ladder can come in handy.

What is a CD ladder?

Essentially, a CD ladder is an investment strategy where you invest in a series of individual CDs with staggered maturity dates. Instead of locking all your money up by opening one CD with a maturity date in the very distant future, you simply use smaller dollar amounts to open multiple CDs with various maturity dates. For example, you could divvy your money up equally to open a one-year CD, a two-year CD, and a three-year CD at the same time to build a three- year CD ladder.

With that strategy, you’ll have funds become available if you need it more often than a traditional long-term CD. But you could still earn more interest than an average short-term CD over the duration of your ladder.

Here’s how you can set up a CD ladder.

Let’s say you want to build a three-year CD ladder with three rungs. If you have $3,000 to invest, then you might choose to divide the funds equally into three CDs with different maturity dates:

When the first CD matures at the one-year mark, you can cash out or choose to reinvest it into another three-year CD that offers a higher yield than a one-year CD. Each of the other CDs that you originally opened will be one year closer to their maturity date. The length of the CD ladder is entirely up to your preferences. But you’d continue to replace the maturing CD with a CD rung that is farthest away. In the above three-year CD ladder example, that means buying a new three-year CD whenever an existing CD matures.

You’ll have the choice to open CDs with the same amount of money in each. But you can also open accounts with various amounts of money. The best choice will depend on current market conditions.

As you build your CD ladder, you’re not under any obligation to open all of your CDs at the same institution. In fact, it’s a good idea to shop around for the best rates on each CD term. Even if you end up working with the same bank or credit union for all of the CDs, it is important to know that you got the best rate available.

Pros of a CD ladder

The major benefit of a CD ladder is that your money is more accessible and you can boost your overall return over the length of your ladder because of the higher APYs on the longer CDs. With a guaranteed rate of return, you’ll also know exactly how much interest you will earn ahead of time. And if rates rise, you’ll have the ability to reinvest in a CD with a higher APY whenever a rung of your CD ladder matures.

Cons of a CD ladder

The downside of a CD is that you could be missing out on earning a higher return in a more aggressive type of investment, such as stocks or bonds. Due to their guaranteed return, CDs are not known for offering the highest interest rates. If your goal is to earn bigger returns and build long-term wealth, you probably should consider other investment vehicles with greater growth potential. For example, a tax-advantaged account that invests in a diversified portfolio of stocks and bonds might be a better option as you save for retirement.

CDs offer a relatively safe investment option. The rate of return is guaranteed. However, you’ll sacrifice the possibility of better returns in an investment vehicle with more risk and price volatility.

In general, using a CD laddering strategy can be a good option for short-term savings goals. However, you might not be able to beat inflation in the long-term. Although CDs are a conservative choice, playing it too safe could hurt your portfolio if your returns don’t keep pace with the rise in inflation. That’s why it’s important to consider diversifying your portfolio even if you’re very risk-averse.

A CD ladder can help you build a predictable investment return. It also gives you the ability to earn better returns than you would on a single short-term CD, as well as the ability to access a portion of your CD savings each year. The tradeoff is you could risk losing to inflation in the long term. Plus, you’ll potentially lose out on better returns offered by other investment vehicles with greater growth potential.

Consider your reason for opening a CD ladder before moving forward. It could be a great fit for your short-term savings goals. But a long-term savings effort might need an additional boost from other investment vehicles.

Featured image by Zephyr_p of Shutterstock.