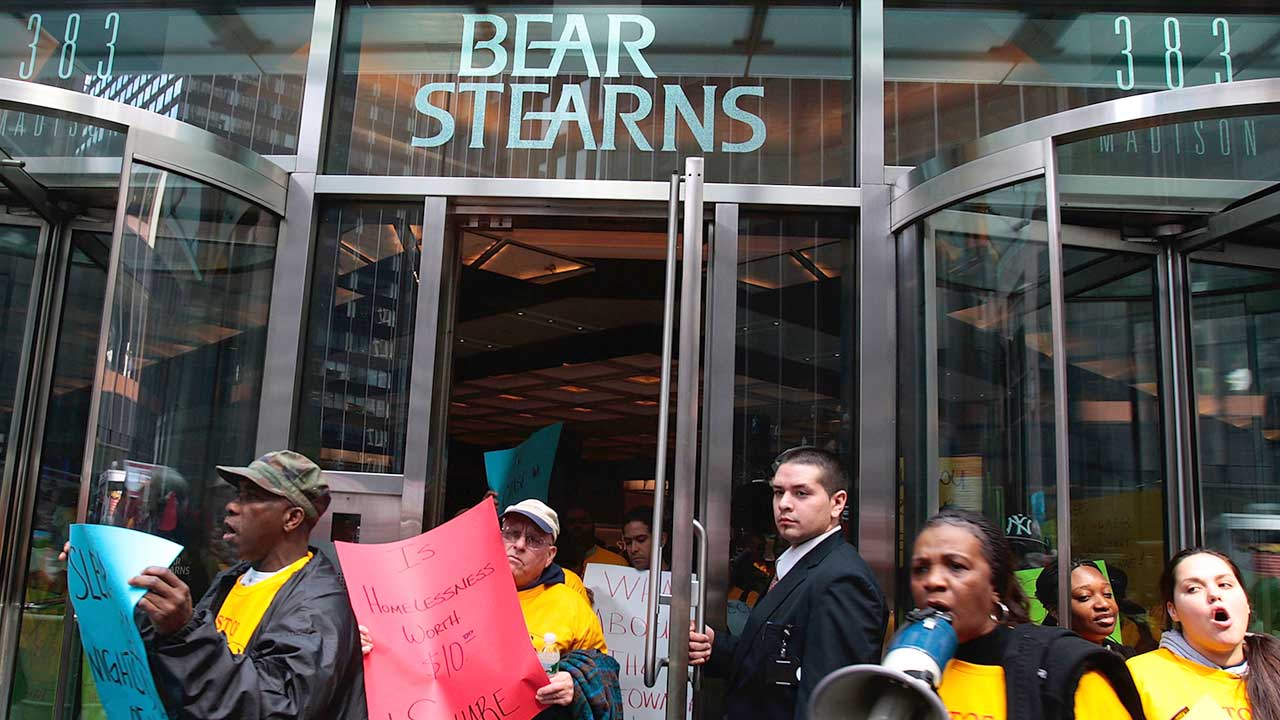 Ten years ago, the U.S. economy was entering the worst downturn since the Great Depression. In an attempt to stave off a major crisis, government officials pushed JPMorgan Chase to take over Bear Stearns, the octogenarian investment bank with $400 billion in assets.

The storied firm was crumbling as investors lost confidence that it could weather the storm of mortgage-related losses that would eventually drown Wall Street. JPMorgan paid just $270 million for the once mighty bank, or $2 a share, with the New York Fed offering $29 billion in assistance.

The Dodd-Frank banking bill, which was signed into law 28 months after Bear collapsed, was designed in part to prevent this kind of ad-hoc rescue from ever happening again. Today, Congress is looking to soften or roll back parts of this major banking reform.

From Bear Stearns to Dodd-Frank

The law established a system of safeguards for banks, from living wills to higher capital requirements to annual stress tests, so that large financial institutions would be unable to subject themselves or the financial system to that much risk ever again. If another $400 billion bank were to veer toward insolvency after Dodd-Frank, the federal government would have the tools it needed take it over, keep the lights running, and then sell it off bit by bit. No panic necessary.

The legal costs that came from assuming Bear and other troubled firms proved so onerous that a healthy bank is unlikely to ever catch a falling knife again.

Over the ensuing eight years, the nation’s banks have slowly been nursed back to health, and are seeing record profits. Despite more than a few scandals — robo-signing foreclosures, JPMorgan’s London Whale and the ongoing Wells Fargo account fraud, to name only a few — there isn’t much fear that banking excess will bring the economy to its knees again anytime soon.

The new bill, which was supported by 16 Democratic senators, would redefine what it means to be too big to fail — quintupling the asset level to $250 billion — leaving only a dozen or so banks with the moniker and corresponding increased federal oversight.

Well-known regional operators, such as SunTrust and BB&T, wouldn’t then have to implement a “living will,” instructions on how they’d be wound down if they were to veer into insolvancy, and would undergo a stress test less frequently.

The law also weakens mortgage rules for banks with less than $10 billion in assets who keep the loan on their books, while also allowing financial institutions that issue fewer than 500 mortgages annually — about 85 percent of banks — to forgo reporting sex and race data on those mortgages.

The Senate bill still has to be reconciled with whatever passes the House of Representatives.

Lawmakers, especially Democrats, would not peel back these regulations for all but the largest banks if they did not feel the aftermath of the financial crisis was safely behind.

Whether or not laxer banking rules will help incentive the shady practices that lead to the Great Recession, or create new ones altogether, remains to be seen.

Still, on the 10th anniversary of one of the brightest flashpoints in one of the worst moments in American history, it can be helpful to see how the average American has fared, and how far she still has left to go.

The Great Recession, of course, was a housing crisis that metastasized into a financial crisis, and the extent of the damage was starting to show up in the data.

During the first three months of 2008, the delinquency rate on single-family homes hit 3.66 percent, according to the Fed, more than double the rate two years earlier. At the height of the housing slump one-in-ten homeowners would be delinquent on their mortgage, before sliding back down to 3.54 percent at the end of 2017.

Home prices have only recently come back to pre-crisis levels, but it remains cheaper to take out a loan to buy your house — a 30-year mortgage cost you 6.1 percent a decade ago, compared to 4.3 percent today.

One major achievement of the Dodd-Frank bill was the establishment of the Consumer Financial Protection Bureau (CFPB), the independent consumer watchdog agency that has forced financial institutions to return $12 billion to about 29 million consumers since it was established in 2011.

The CFPB also implemented new rules and guidelines that were supposed to make taking out a mortgage easier to understand and less likely to end in fiasco.

The new Senate banking bill undercuts some of these rules. For instance, it allows institutions with less than $10 billion in assets to maintain certain legal protections even if they offer mortgages with looser underwriting standards if they keep the mortgage on their books.

Proponents say this will allow local banks to sell more mortgages to area residents, while some are concerned this is only the banking lobby’s first bite at the apple.

The Federal Reserve, in an attempt to save the world from economic catastrophe, dramatically lowered the federal funds rate to practically zero, and then kept it there for about eight years.

That pushed down the yield on savings products, from CDs to savings account, meaning your cash earned a lot less money. In March 2008, the top savings yield was 4 percent, according to Bankrate data, compared to just 1.85 percent today.

You’re a number of Fed meetings from getting that kind of yield again.